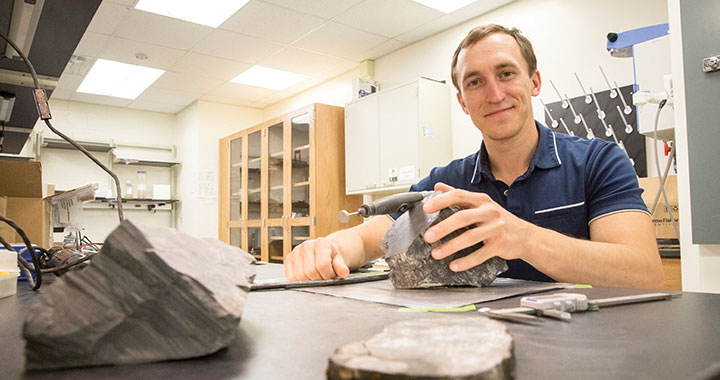 Erik Gulbranson, paleoecologist and visiting assistant professor at UWM, studies some of the fossilized trees he brought back from Antarctica. Gulbranson is returning there for further research this year. (UWM Photo/Troye Fox)

During Antarctica’s summer, from late November 2016 through January 2017, UW-Milwaukee geologists Erik Gulbranson and John Isbell climbed the McIntyre Promontory’s frozen slopes in the Transantarctic Mountains. High above the ice fields, they combed the mountain’s gray rocks for fossils from the continent’s green, forested past.

By the trip’s end, the geologists had found fossil fragments of 13 trees. The discovered fossils reveal that the trees are over 260 million years old, meaning that this forest grew at the end of the Permian Period, before the first dinosaurs.

“People have known about the fossils in Antarctica since the 1910-12 Robert Falcon Scott expedition,” said Gulbranson, a paleoecologist and visiting assistant professor in UWM’s Department of Geosciences. “However, most of Antarctica is still unexplored. Sometimes, you might be the first person to ever climb a particular mountain.”

The time frame is exactly what they are looking for. The Permian Period ended 251 million years ago in history’s greatest mass extinction, as the Earth rapidly shifted from icehouse to greenhouse conditions. More than 90 percent of species on Earth disappeared, including the polar forests. Because the Antarctic forests grew at polar latitudes where plants can’t grow today, Gulbranson believes that the trees were an
extremely hearty species and is trying to determine why they went extinct.

Many scientists now believe that a massive increase in atmospheric greenhouse gases, such as carbon dioxide and methane, caused the Permian-Triassic extinction. It’s likely that over the course of 200,000 years – a short time, geologically speaking – volcanic eruptions in Siberia released many tons of greenhouse gases into the atmosphere.

“This forest is a glimpse of life before the extinction, which can help us understand what caused the event,” Gulbranson said. It can also give clues to how plants were different than today.

At the Permian Period’s end, Antarctica was warmer and more humid than it is today. The world’s continents, as we know them, were packed together in two giant landmasses – one in the north and one in the south. Antarctica was part of Gondwana, the supercontinent spanning the Southern Hemisphere that also included present-day South America, Africa, India, Australia and the Arabian Peninsula.

There would have been a mixture of mosses, ferns and an extinct plant called Glossopteris, and it’s likely that this forest stretched across the entirety of Gondwana.

Gulbranson said that the fossil forests looked different than forests today. During the Permian Period, forests were a potentially low diversity assemblage of different plant types with specific functions that affected how the entire forest responded to environmental change. This is in contrast to modern high-latitude forests that display greater plant diversity.

“This plant group must have been capable of surviving and thriving in a variety of environments,” Gulbranson said. “It’s extremely rare, even today, for a group to appear across nearly an entire hemisphere of the globe.”

But not even these robust forests survived the high carbon dioxide concentrations of the mass extinction. The resilient plants also must have survived through the polar extremes of perpetual light and total darkness. Even in a warmer past, the polar regions would have experienced months of darkness in winter and would have gone without sunset during the summer months.

By studying the preserved tree rings, Gulbranson and colleagues have found that these trees transitioned from summer activity to winter dormancy rapidly, perhaps within a month. Modern plants make the same transition over the course of several months and also conserve water by making food during the day and resting at night. Scientists don’t yet know how months of perpetual light would have affected the plants’ day-and-night cycles.

“There isn’t anything like that today,” Gulbranson said. “These trees could turn their growing cycles on and off like a light switch. We know the winter shutoff happened right away, but we don’t know how active they were during the summertime and if they could force themselves into dormancy while it was still light out.”

He’ll returned to the site in November and will stay through January 2018. He hopes to learn more about the extinction event. He previously wasn’t able to study the extinction period because of weather constraints and aircraft troubles. Gulbranson is going to look for deposits from the mass extinction to see if he can determine exactly how the forests responded as carbon dioxide rose.

“The geologic record shows us the beginning, middle and end of climate change events,” Gulbranson said. “With further study, we can better understand how greenhouse gases and climate change affect life on Earth.”