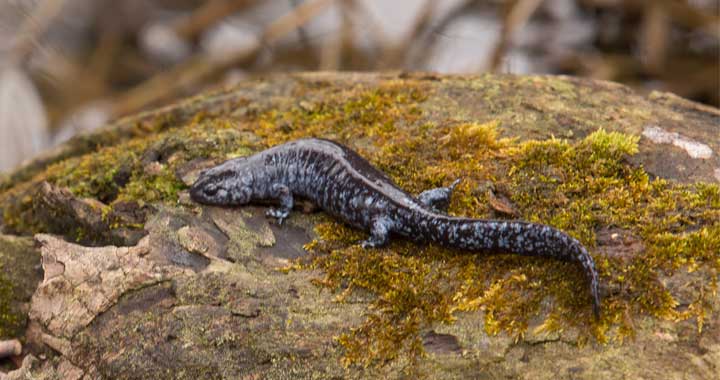 On a chilly March afternoon, field biologist Gary Casper and his assistant Beth Mittemaier, both in waders, slogged through a marsh just off of the Good Hope Road exit on I-41 to reach submerged metal traps. The first was empty, but the next trap was occupied – a blue-spotted salamander was coiled in the bottom.

“So far, this is the only species we’ve found here,” Casper said as he tipped the creature out into his hand.

Casper, a biologist with the UWM Field Station, is in charge of conducting the first-ever comprehensive wildlife survey in Milwaukee County. The Milwaukee Estuary and its associated waterways, including the Milwaukee and Menomonee rivers, were designated an “Area of Concern” in 1987 by the EPA and Wisconsin Department of Natural Resources. As part of that and other agencies’ efforts to restore the quality of the estuary, stakeholders decided that they needed to address wildlife population impairments around the rivers.

Casper sits on the Wildlife Advisory Committee for the AOC. In order to make changes, he said, first the committee needed to understand how area wildlife has been impacted by the pollution to the estuary and the development of Milwaukee County by conducting a three-year survey.

“Some things clearly are gone. There used to be wolves in Milwaukee County, but now we’re not going to spend any time looking for them. But other things like, for example, the prairie crayfish, that was listed as ‘special concern,’” Casper said. “Now, as a result of our work, we found that they’re very wide-spread and common, so it’s possible that that ranking was in error and they’re not really of concern.”

Finding these animals takes some legwork. Casper and his team have used binoculars to search for birds; set traps to catch turtles, crayfish, and salamanders; put out trail cameras to record larger mammals like otters and foxes; built nest boxes for flying squirrels; and set up digital audio recorders to record and analyze the sounds of animals like birds and frogs. The sights and sounds give the team a good idea of how many animals and what types live in a given area.

Some of the wildlife Casper has found was unexpected.

“I think the Virginia Rail we got last year breeding in a marsh was a surprise. All of the professional birders we consulted said, ‘Don’t bother looking for them; they’re not here.’ I was happy to find a couple more populations of digger crayfish, but they’re definitely rare. The fact that they’re surviving in urban Milwaukee County is encouraging. We were happy to find that flying squirrels are hanging on even though there’s not a lot left in terms of good, quality, mature forest,” Casper said.

However, “Other surprising things were what we’re not finding. A lot of the small frogs like spring peepers and tree frogs are really rare. Salamanders in particular are almost gone from the system. I think we’re identifying the reason for that and the potential for restoring them is there, now that we know,” he added.

That’s the next step for the AOC stakeholders – to identify ways to help some of those threatened species in Milwaukee County recover, procure funding, and then begin restoring some habitats. After that begins, Casper said, wildlife surveys should continue to measure the success of the restoration projects.

One of the most hopeful signs of wildlife recovery is how involved the community has been, Casper added.

“The community connection here is really inspiring. Really, all conservation is local,” he said. “What we’re looking at is literally what’s in your backyard. It’s what your kids are able to see and play with – are they able to go catch frogs? Are they able to see some of these really pretty birds like redstarts raising young in the neighborhood woodlot? … A lot of people warn me that ‘People don’t care about those slimy frogs,’ but I’ve found the opposite is true. Once they understand what’s going on, it’s not just pretty birds and warm and fuzzy mammals they care about; they care about it all.”

Community members can help Casper with the survey by reporting their own wildlife sightings at iNaturalist.org (http://bit.ly/1ML4ruh). The effort is important because green spaces in Milwaukee help everyone, not just wildlife.