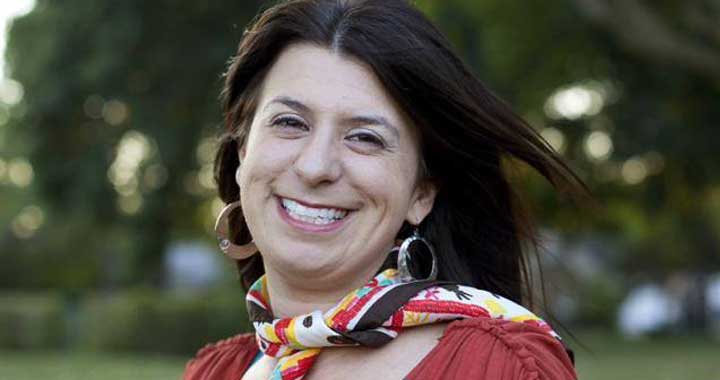 A doula is a birthing professional who provides information and emotional and physical support to expectant mothers. They are usually hired by private clients and are on-hand for both pre-natal appointments and the labor itself.

UWM alumna Cara Kreuziger has a unique clientele for her doula practice.

She works for the Minnesota Prison Doula Project, a nonprofit effort to provide pregnant inmates access to a doula during their pregnancies.

“(Prisoners) don’t have any support while they are giving birth. They can’t have their family or friends with them. It’s just the hospital staff and corrections officers in the room,” Kreuziger explained. “Doulas help you process past experiences before you give birth that can hinder an easy birth. You can build up a lot of trauma that can make it hard to go in and relax and have a baby.”

Kreuziger, a Milwaukee native, graduated from UWM with a French major, a subject she picked because her grandmother was a native speaker. After graduation, she earned a paralegal certificate from Milwaukee Area Technical College and worked in several courts as she and her family moved between Wisconsin and Minnesota for schooling and jobs.

She became a doula after the birth of her second child. Kreuziger hired doulas for each of her births and found herself becoming an advocate for pregnant women.

“I have prenatal appointments with my clients before their due date. I’m there for the entire birth. That could mean a day or a few hours,” Kreuziger said. “The point of a doula is that there is continuous care. There’s no shift change; you’re dedicated to this mother throughout her birth.”

She volunteered as a doula with a local hospital and began taking private clients as well. Her business name, La Pleine Lune, harkens back to her UWM major. Then she found an opportunity to combine her interest in the legal system with her new profession by joining the Minnesota Prison Doula Project.

Founded by Erica Gerrity in 2010, the project matches incarcerated pregnant women with a doula who will provide parenting support over the course of the pregnancy. According to the project’s website, about 6 to 10 percent of women are pregnant when they enter prison, and are at risk for numerous physical and mental health concerns. Many already have children and were the primary caregivers before their arrest. All will be separated from their infants shortly after delivery, and the children will be placed with a relative or in foster care until their mother’s release.

The doulas working with the Minnesota Prison Doula Project can be a valuable resource for both prisoners and prison officials. In practical terms, said Kreuziger, she conducts parenting classes and teaches her clients how to care for their infants. She stays with them throughout their deliveries and provides much-needed emotional support when the women must return to prison without their newborns.

The results are undeniably positive.

“Right away, there was a drastic decrease in intervention rates. C-sections decreased – the number is super, super low. It was cut at least in half,” Kreuziger said. “We could see right away that the officers were glad to have us there in the room. It was a lot less pressure on them.”

In fact, in the first year the Minnesota Prison Doula Project was working with prisons, the C-section rate decreased from 63 to 3 percent. That, in turn, saved the prison system money since C-sections and subsequent care are more costly than vaginal births. No children were born premature, compared to 22 percent of births among uninsured women nationwide, and all were born at a healthy weight. Women reported being more confident in their parenting skills and formed stronger bonds with their infants, Kreuziger said.

She herself had one client who wrote an article for the prison’s quarterly newsletter detailing her experiences with Kreuziger. The inmate was especially touched by how Kreuziger gave her a knit blanket to keep with her so that it would smell like her when she sent it home with her newborn after she returned to prison.

“It was nice to see that something like that touched her so deeply,” Kreuziger said. “I think we’re helping them see that they’re not bad people; they just made a bad decision and there’s hope.”