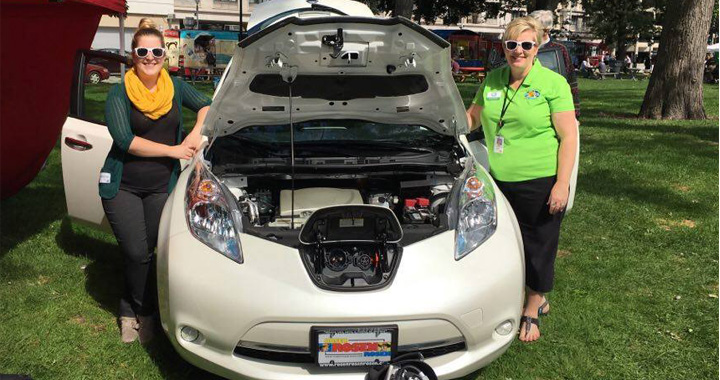 Stephanie Stilwell likes people – working with them, helping them, connecting to them. One thing that she’s not a big fan of is cars.

That’s what made her recent internship with Wisconsin Clean Cities so interesting.

Wisconsin Clean Cities is a non-profit organization that aims to reduce vehicle gasoline usage by providing education about alternative fuel sources and fuel efficiency. Stilwell, who is working toward a Master’s degree in Urban Studies at UWM, worked on multiple projects involving alternative fuels, vehicles, and technology with the goal of reducing America’s dependence on oil.

“I consider myself an environmentalist,” Stilwell said. “I was not only excited develop my skills professionally, but the mission and message behind Clean Cities fulfilled personal aspirations of mine to work toward something I had been so passionate about in my personal life.”

Stilwell originally graduated from UWM in 2012 after majoring in International Studies. She moved to Minnesota and after a string of internships, realized that her passions did not lie in either Minnesota or International Studies. She moved back to Milwaukee and began working with an Americorp VISTA team to come up with solutions to problems related to economic, social, or environmental issues on the city’s north side. Through this Americorp VISTA position she was nudged toward attending UWM again, this time focusing on Urban Studies.

During her classes, she found an ad for the Clean Cities internship and jumped.

“The Clean Cities mission is important because our transportation sector is going to reach a breaking point where petroleum-based fuels are no longer going to be a viable option,” Stilwell said. “By promoting and educating members of transportation industries to new alternative fuels and technologies, we can move towards a more sustainable future for all of us.”

Her job with Wisconsin Clean Cities is Stilwell’s fourth non-profit internship. When she first started, she was taken aback by how different it was from what she had expected.

“I didn’t react to this internship the way I thought I would,” Stilwell said. “The job description made it seem primarily about vehicles, but I was pleasantly surprised to find that there was a lot of human interaction that goes along with that. I get to go out in the field and gain new experiences that better me.”

She fondly remembers one of her biggest successes working for Wisconsin Clean Cities.

“We were working with Nissan to try and sell a fuel-efficient vehicle to a program called Rev Up Wisconsin,” Stilwell said. “By providing a discount on Nissan’s most popular electric vehicles to promote fuel efficiency, we ended up selling over 40 vehicles, which actually exceeded our expectations.”

While vehicles may not be her favorite pass-time, Stilwell values her new-found knowledge on Wisconsin’s economic, environmental, and energy policies, which she plans on taking with her in future jobs. She plans to graduate in August and wants to pursue her passions in the nonprofit world.