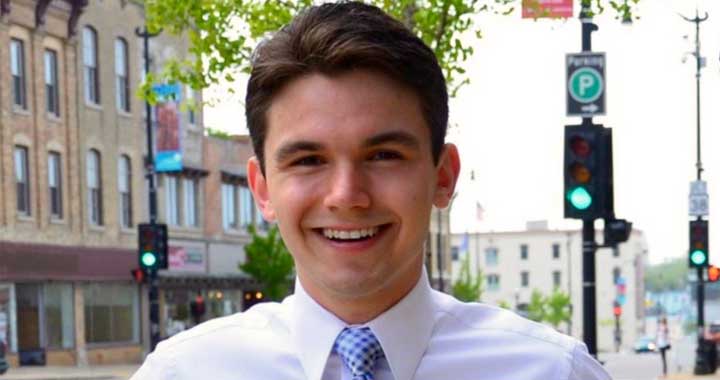 Trevor Jung made some wonderful memories during his internship, but the highlight was probably delivering poultry alongside Milwaukee Mayor Tom Barrett.

“I got to hand out turkeys to families for Thanksgiving. That was so neat because you got to see the real sincerity of Mayor Barrett,” Jung said. “That’s what being the leader of a city is all about – that service mindset.”

Jung, an Urban Studies major also working for a certificate in Urban Planning, recently ended a five-month internship in the Milwaukee Mayor’s office. He worked part-time in the Constituent Relations Department, fielding phone calls from concerned residents about everything from snow plowing schedules to finding shelter on cold winter nights. The experience he gained will supplement his UWM education.

“To be able to refer them to the proper department, to be able to know how city government works, was a big part of the job. That was exciting for me, because the dream for me is to work in local government,” Jung said.

That aspiration was what initially drew him to his Urban Studies major. Jung was adopted from Russia when he was two years old and grew up with his father in Racine, Wisconsin. He loves his hometown with a passion, and even sits on the board of Visioning a Greater Racine, a group working to create a community-based vision for the future of the city. Jung would like to eventually work in the Racine city government.

Gaining experience by working in Milwaukee’s government was a natural fit. Jung decided to apply for the internship after a friend suggested that he look into working at City Hall. From September to January, he manned the phones each morning and then took the Green Line back to UWM for his classes in the afternoon.

It was one thing to take Urban Studies classes and quite another to work directly for an urban population.

“I’m so grateful that I did the internship, because I got to see the real stories behind the theory. You talk about segregation, you talk about public housing. You talk about homelessness, economic development, and transportation, in these Urban Studies classes,” Jung said. “When you sit in your little cubicle in the Mayor’s office answering phones, you hear people call in the wintertime wanting to know if there’s any heating shelters near them. It puts things in perspective. You’re not just studying these things to be enlightened; you’re studying these things because these are real problems that need to be addressed.”

Of course, it was fun working alongside the mayor as well.

“I think you get caught up and think about him as this untouchable guy in City Hall who you hear about him on the news. But he’s such a nice guy,” Jung said with a laugh.

Some of the issues he helped deal with in the mayor’s office hit closer to home than he anticipated. Jung sat in on several press conferences when Barrett was discussing proposed legislation that would allow people to carry guns on UW System campuses. Jung is a member of the UWM Student Association – he was just elected Vice President of Student Affairs – and dealt with the issue not only from a local government standpoint but also from his student government view.

Jung ended his internship with a greater understanding of the concepts he learned in class, and an appreciation for the efficacy of local government.

“I’d say the takeaway is that local government can only work if it’s open, and if it’s accessible. The only way we can solve problems in the city is by hearing from people that these problems exist,” Jung said. “I think half the job of the Mayor’s Office isn’t necessarily policy, not necessarily the budget, but being receptive to people’s concerns and responding to them. I would say that government is an arm of the people.”

He’d like to put that observation into practice one day after he graduates in 2018 and returns to Racine.

“I’ve always been about, how am I going to continue to serve Racine?” he said. “Just like Milwaukee, with as many challenges as it has, it has just as many opportunities. I want to go back and tap into those opportunities. With my education at UWM I think I’ll be able to do that.”