L&S / All News / Featured Stories / This land of mine: Geosciences alum protects forests 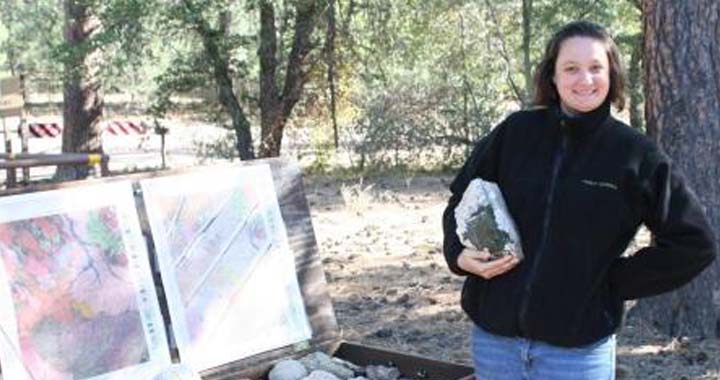 Atkinson graduated from UWM in 2003 with her Bachelor’s degree and again in 2005 with her Master’s, both in Geosciences. She went to work for the Forest Service, fi rst surveying gravel pits in the Ottawa National Forest in Michigan’s Upper Peninsula, and then to her current job in the Tonto National Forest in Arizona. Each national forest, she explained, is divided into ranger districts, and Atkinson works in the Globe Ranger District.

“When there’s exploration or mining on the forest, the Forest Service is the land management agency. I make sure they’re (the mining company) doing what they said they were going to do,” Atkinson said. “I make sure that any conditions that we applied to the permit are followed through with. I do a lot of fi eld-checking.”

In Arizona, that could mean gold or silver mines, but most active mines are for copper. There are abandoned mines too, mementoes from an older era, and it’s Atkinson’s job to fi nd them. Her training in Geographic Information Systems (GIS) from UWM comes in handy there; she can use maps to fi nd the locations of the old mines and attach data to those points in the map so others have information about the type of mine, its size, and more.

Much of her work is a balancing act between mining companies and others who want to see the land untouched.

“The Forest Service is a land management agency. There’s a lot of different land uses that are going on that are being managed. There are not only minerals, but there’s wildlife habitat and rangeland management. It’s a coordinated effort to keep those things productive and benefi cial to everyone that uses it. There’s people out there using the grounds for recreation as well as mineral activity or cattle grazing,” Atkinson said. “Sometimes, people don’t really understand what I do so they don’t see a lot of value in it. I think it’s important because I’m looking at how is this going to help the land.”

One of her many enjoyable job duties is when she can directly help the land by fighting forest fi res with fi re crews in her district. She completed training and passed a physical test to qualify to ride out on the engines. During one fi re, she rode in a helicopter and used her GIS skills to map the the fl ames for crews on the ground.

While she loved her time at UWM and her current job, Atkinson has some advice for students who are interested in a similar career track: Take classes outside of your area of expertise, because you need more than just geoscience skills.

“Of course, I’m a geologist, a minerals administrator. I use those skills all the time, but one thing I took that was outside of that area was GIS. I’m able to make my own maps. That’s been really helpful,” Atkinson said. “I think if I want to move up, probably a business class or two would have helped. … Probably a couple of biology classes would have been good. I spent a lot of time learning how to identify plants because they’re associated with certain types of soils or geology.”

The classes she did take led to some grand adventures.

“I’ve seen gila monsters several times, which it’s kind of rare to see those. I drive a Jeep, and that was a learning curve. Out here, it’s a dirt road on a mountainside. One side is up the slope and the other side is a steep drop. That took a while to get used to,” Atkinson said with a laugh. “I’ve seen a lot of cool things.”