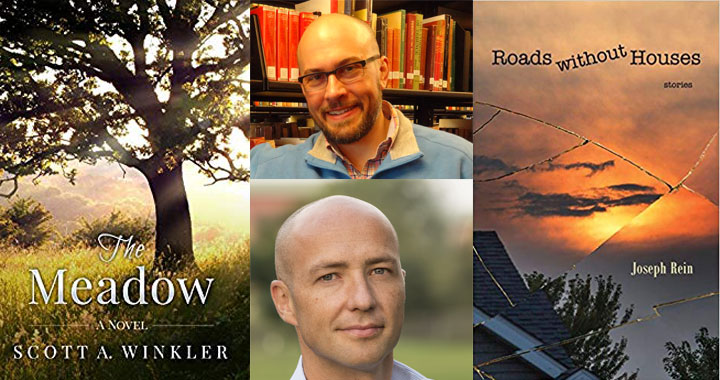 Summer has arrived and it’s time to hit the lakeshore for some relaxation and reading. We have a couple of suggestions for your beach reads this year, recently published and both written by UWM alumni.

Family secrets bubble to the surface against the turbulent backdrop of the Vietnam War in Winkler’s debut novel.

The Meadow is the story of Walt, a new high school graduate who is hoping to attend college and searching for ways to avoid the military. Although Walt is opposed to the war, his father Otto, a World War II veteran, believes that Walt and his brother Clay should serve their country. Walt escapes the draft when an accident renders him physically unfit for duty, but it comes with a price: Otto has never talked about his own war experiences, but now secrets are exposed, shaking Walt, his family, and the entire town.

“It ends up being a book about moral injury, about dealing with trauma, and about the importance of storytelling and the role that narrative can play in healing and acceptance,” Winkler said.

The Meadow began life as Winkler’s PhD dissertation. He chose UWM based on the strength of its creative writing graduate program, and because he could commute to class from Green Bay. Winkler now teaches high school English in Luxemburg, Wisconsin, about a half-hour outside of Green Bay.

His students were a large part of the inspiration for the book; Winkler realized that for most of their lives, the U.S. has been engaged in some sort of military conflict. That in turn made him contemplate the effects of war on soldiers, especially the psychological and emotional impacts of killing. Writers like Tim O’Brien, the author of the well-known book The Things They Carried, set during the Vietnam War, also had an influence on his work.

Even as the book grapples with the idea of trauma and war, there’s a little romance and a lot of intrigue.

“It’s a good story. It’s a historical book, yes, but the themes are timeless,” Winkler said. “It’s very much a father/son book, a brothers book, a teacher/student book. It’s a love story. I think everyone is going to find something in there that they’ll be able to connect to.”

Winkler’s book is available on Amazon at https://amzn.to/2K75Ift.

If you don’t have time to commit to a novel, you might enjoy Rein’s collection of short stories, each featuring compelling characters who find their lives winding in unexpected directions. The stories themselves intertwine, with side characters in one arc featuring a starring role in other stories.

The tales, told in both traditional formats and as “encyclopedia stories” where the narrative unfolds as though it’s a Wikipedia entry, range from one girl’s struggle with an eating disorder to a marriage built on a single lie.

Rein’s particularly proud of that last one. It follows a man who witnesses a near hit-and-run. He recounts the incident to his girlfriend – or at least, the version he wants to pretend happened, where he stepped in and became a hero. His girlfriend had been contemplating leaving, but his act of (supposed) heroism changes the trajectory of their relationship.

“That story was born out of an experience I had at the airport,” Rein recounts with a laugh. A fellow passenger assumed that Rein, dressed in a suit for a job interview, was an important businessman. Rein was tired, “So instead of correcting him, I went along with it. He thought I was something I wasn’t. He even went so far as to ask me what I did. I said bonds. That’s where the seed of this story started.”

Many of the stories draw on Rein’s experiences, and many are set in Wisconsin. Like Winkler, Rein chose UWM for the strength of its creative writing graduate program and also because he wanted to return to his home state after attending Nebraska for his Master’s degree. That love of the Midwest is reflected in book.

“Anything that gets written here often gets labeled as ‘regional,’” he said. “One important thing, I think, is to keep reading Midwest authors. Not only is the place as good, but the writers are just as good and talented and have just as universal of themes as literature from the coasts.”

Rein’s debut collection is available on Amazon at https://amzn.to/2K7Eoh5.

Professors collaborate at the intersection of tech and health