Studying the roots of the Seed Vault 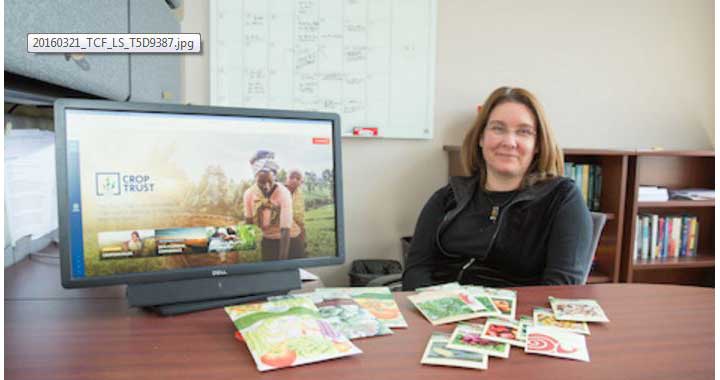 There’s a groundbreaking international collaboration to ensure the security of the world’s future food supply, and it’s buried in the Norwegian permafrost.

For the last few years, the Svalbard Global Seed Vault has been the focus of UWM anthropologist Tracey Heatherington’s research. She’s studying not only how people collaborate across the globe, but also science in the making.

“This is science doing something daring, and it takes a lot of people to put it together,” Heatherington said. “There are some really interesting interactions that have to happen between science and society.”

At its most basic, the Svalbard Global Seed Vault is like an underground refrigerator filled with boxes upon boxes of seeds. Although the public imagination has run wild with thoughts of regenerating the Earth’s food supply in the event of a global disaster, said Heatherington, the seed vault actually acts as a back-up system for other seed banks located around the world. The seed vault at Svalbard is a small piece of a much bigger, global partnership that involves many other seed banks that actively conserve, regenerate and distribute the seed. Any country can send seeds to the back-up vault for storage so that, even if something happens to the major collections of seeds, there will always be a reserve sample. The Global Crop Diversity Trust, an international organization, facilitates a worldwide network of seed banks that are now working together to ensure conservation of genetic resources.

In fact, last year, one of the world’s major seed banks in Syria had to relocate operations because of the current civil war. For the fi rst time since its founding, seeds were withdrawn from the Global Seed Vault to replace parts of the collection that had not yet been duplicated in other banks when scientists were evacuated from the country after maintaining operations under increasingly dangerous conditions throughout four years of conflict.

The Svalbard vault also stores crop varieties that are being pushed out of industrial food systems. The Green Revolution resulted in larger farms and the breeding of high-yielding crops in the 1950s, ‘60s, and ‘70s, but “those crops get adopted in agriculture around the world, and they become much more prevalent,” said Heatherington. “They start to edge out the different kinds of local seeds that might have been used once. Over time, we’ve actually lost a huge amount of biodiversity in the farmers’ fields.

“Supported by the Crop Trust, the Global Seed Vault keeps the world’s major collections of traditional crop varieties,” she continued. “They are important to a lot of people culturally and there are nations that really want to benefit from the agricultural development that can result from research on those same varieties.”

Heatherington began studying the Svalbard Seed Vault in 2013 with a fellowship at the Center for 21st Century Studies and just a $400 grant. Since then, her work has taken her to the vault itself in Norway, the UN “Sustainability Hub” in Germany, and most recently, the meetings of international gene bank managers in Turkey, to talk with scientists about their work. It warrants examination because this sort of collaboration has never been done before at any time or place in the world.

“The scientists think of it as a global commons. If we understand it that way, this might be the first global commons we put the institutional package together to manage,” she said. “There’s an international framework that governs the ownership of plant genetic resources for food and agriculture that have been deemed most crucial to the future of food security. Not only grains like rice, wheat and corn, but also other key staple crops such as beans and sunflowers are managed at a global level. The biodiversity represented in those crops are resources that need to be carefully conserved in the face of global climate change.”

Heatherington is currently tracking the complex journeys that seeds travel from farmers’ fields to agricultural research centers to seed banks, and back again. She wants to know whose hands the seeds go through, how people at each step think about the seeds, and how they manage to bring together resources and expertise in order to accomplish goals.

She’s come across inspiring stories, from local organizations like Seed Savers Exchange in Iowa, a non-profit that keeps a state-of-the-art seed bank for heirloom varieties and brings together gardening enthusiasts from across the country who save and swap their own seeds, to the work of colleagues in plant sciences who collect and study the wild relatives of important crops.

“It’s about the technology and the science and these institutional initiatives, but ultimately, it comes back to incredible collaborations and also to what ordinary people do informally,” Heatherington said. “The amount of love and care that’s invested in the way gardeners and farmers treat their seeds … that’s also part of how we get real diversity. That’s how we keep making sure the world has food tomorrow.”

In the Media and Around the Community - February