Students send plasmids to space on a NASA rocket 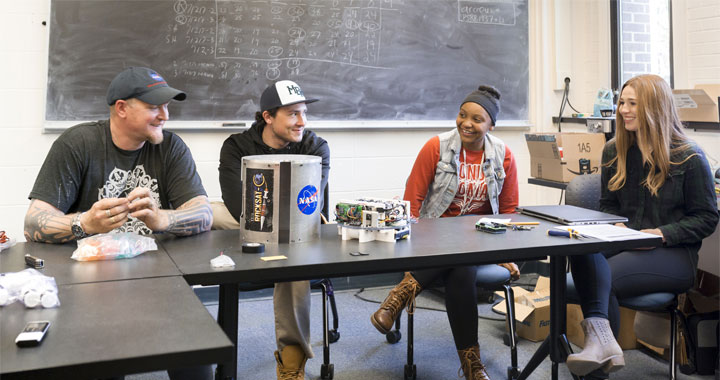 From left: Ryan Kisiolek, Connor Nethen, Azia Barner, and Kaitlin Krause meet in the UWM Physics building days before the launch to work on the payload. (UWM Photo/Elora Hennessey)

At 5:29 a.m. on June 21, before the sun had even reached the horizon, a NASA suborbital sounding rocket blasted off from the Wallops Flight Center in Virginia, reaching more than 70 miles above the Earth before it landed by parachute in the Atlantic Ocean. It carried a precious payload: the research project of UWM’s Students for the Exploration and Development of Space (SEDS) team.

The launch was part of NASA’s and the Colorado Space Grant’s RockSat-C program. For a fee, NASA allows student groups to design their own experiments and send them up on one of the space agency’s rockets. The launch takes place during NASA’s annual Rocket Week, where students from across the country gather to present their experiments before their projects take off.

“Meeting all the other RockSat teams was a blast,” said Physics major Kaitlin Krause, who also runs the UWM SEDS Instagram page. “Learning about all of the different projects happening and the different perspectives was eye-opening. We definitely found inspiration for the coming years, such as working towards a more complicated payload. It was great learning experience, and just plain awesome to be able to walk around a NASA facility talking to actual rocket scientists.”

When microbiology major Ryan Kisiolek attended Rocket Week two years ago, “There was somebody doing a biological experiment, and I thought, that is so cool! We have got to do that,” he recalled.

Kisiolek, a student at UW-Sheboygan at the time, began knocking on doors to find funding for his own project. NASA charges roughly $7,000 to reserve space on the rocket, and the students also have to buy their materials and pay for travel to Wallops to attend the launch.

Kisiolek joined forces with Physics major Bob Aloisi, and, with several teammates, they procured the necessary funds, designed their experiment, and attended the 2017 Rocket Week launch.

This year, their work was funded largely by a grant from the Wisconsin Space Grant Consortium. The team also received funding from the UWM Foundation and the College of Letters & Science, alongside a travel grant from UWM Student Involvement and donations from faculty members in the Biological Sciences and Physics departments.

The SEDS team repeated their experiment from last year, improving their design and

“The DNA comes in a non-living form called plasmids,” Aloisi explained. “They’re short snippets of genetic materials that contain genes from different organisms. We use a gene with antibiotic resistance and another gene from a jellyfish that glows under UV light.”

Now that their samples have been recovered from the rocket, the SEDS team will introduce the plasmids to living bacteria. By gauging whether the bacteria reproduce and exhibit the glow-in-the-dark gene and the antibiotic-resistance gene, the team will gain a better understanding of how gamma and beta cosmic radiation affect DNA.

The payload – the structure housing the vials of plasmids and Geiger counters, used to measure radiation – had to match exacting NASA standards. The entire payload fit into a custom 3D-printed frame wired like Dr. Frankenstein’s Christmas tree.
The data was collected and recorded on two micro-SD cards – two, because the team learned last year that they had to back up their data collection method when the SD-card broke after the 2017 launch.

Building the payload was no easy feat. “None of us have an electrical background. I didn’t have a clue what I was doing when we were first putting wires together,” said Krause. “It was definitely a lot of learning how it all fits together to make the printed circuit board. It’s been a journey.”

After the rocket was launched and landed in the ocean, the vessel was recovered by a local fisherman, nicknamed “Captain Tom.” The rocket was loaded onto a truck and delivered back to Wallops, where the UWM team picked up their payload. Now that their data is back in-hand, the team will be taking a closer look at the DNA using an infrared spectroscopy microscope. Azia Barner, mentored by Physics professor Carol Hirschmugl, is leading the charge there.

Working on the payload has given the UWM SEDS team a thorough education.

“In addition to mechanical engineering, there’s also programming involved. They have to do data analysis and statistics,” said Physics professor David Kaplan, the team’s advisor. “And you get to see the thing you’ve worked on for a year go up and hopefully not explode.”

And, Kisiolek added, their research has potential implications for the medical field. If radiation actually increases the spread of antibiotic-resistant bacteria, hospitals may have to rethink how they sterilize equipment. Aloisi hopes that, after more research, the group will be able to publish a paper with their findings.

Working on a project that flew on a NASA rocket was exciting.

“It was a little intimidating, but it’s been a great experience,” Kisiolek said. “And it’s cool knowing these plasmids went to space.”