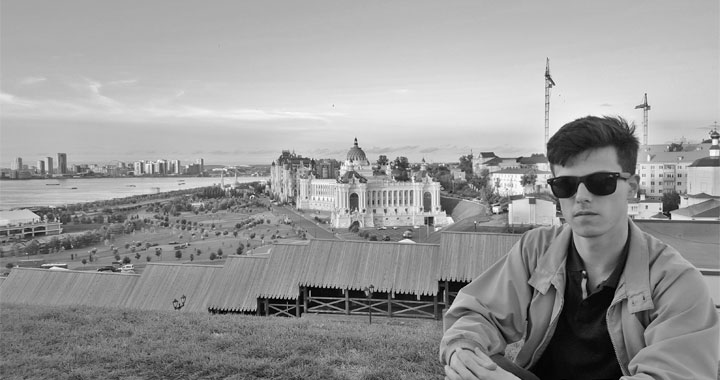 Russian major Mackenzie Tubridy sits atop a hill overlooking a Russian city during his study abroad to Saratov, a city 11 hours southeast of Moscow. Tubridy says that despite news of Russia dominating American headlines, life for regular Russians has continued as normal. Photo courtesy of Tubridy.

In Russia? It’s business as usual.

In fact, said Mackenzie Tubridy, many Russians aren’t even aware that an American investigation into Russian election interference is taking place.

“It’s important to remember that the information Russians receive is different from the information we receive in the United States,” Tubridy said. “Likewise, the Russians are less conscious of the goings-on in the United States much in the same way that Americans are pretty clueless of the goings-on here in Russia. Ignorance doesn’t change much from country to country.”

Tubridy, a UWM Russian major, is several months into a year-long study abroad experience in Saratov, Russia, a city 11 hours southeast of Moscow. He is set to return to the United States in July. Despite his home country’s current problems with his host country, Tubridy has felt welcomed by the citizens of Saratov.

“Some people are really surprised to see an American here in Saratov, while others couldn’t care less. But I would say that, by and large, Russians have had a positive reaction when meeting me, especially the older generations,” he said. “[They] always invite me to do something with them – go out for coffee, cook dinner together, or even go hunting for mushrooms.”

Tubridy realized early on in his major that in order to really learn Russian, he would have to go straight to the source. It’s a difficult language to learn for native English speakers, he said, and even after six months in Saratov, he’s still not totally confident in his speaking and comprehension.

But, he added, “Now I barely notice that people are speaking in another language. That doesn’t mean I always understand what’s being said, but the so-called language shock has gone away, and now I can more or less follow what people are saying.”

He’s taking several Russian language courses, as well as a literature class and two courses in sociology, his minor. Everything is taught in Russian. It’s a busy schedule, but there’s time for some fun and excitement too – Tubridy fondly remembers one day-trip to a village a few hours north of Saratov when his van driver got fed up with a traffic jam and literally drove through a farm field to avoid the other cars. He’s talked, cooked, and eaten with the citizens of his host city and has had other fun experiences.

There have been instances of culture shock. For instance, Russians are much more “economical” with their smiles than Americans (“From the Russian point of view, if someone is smiling all the time, it means they must have some sort of mental condition,” Tubridy said). However, American culture, from music to television shows, is popular among younger Saratov citizens and English phrasing crops up everywhere from slogans on t-shirts to everyday conversation.

It’s a small reminder that despite national politics and headlines, the people of Russia are just that – people. To really get to know a foreign culture, even one that is currently at odds with America, you really have to get to know the people.

“You need to go out and experience it every day, by talking and laughing with people, getting to know what they think, why they think it, learning to cook food with them, and listening to music,” Tubridy said. “We call this an ‘immersion experience,’ but I think that term waters down the experience itself.”