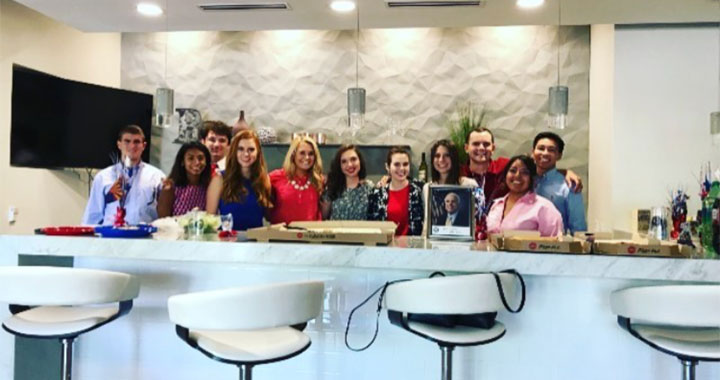 UWM Political Science major Elliott Evans (third from left) gathers with his fellow interns during a party in the summer of 2017. Photo courtesy of Elliott Evans.

This past summer, Elliott Evans, a political science major at UWM, completed a career-shaping internship with the office of Arizona Senator John McCain in his home city of Phoenix.

“I was home [in Arizona] for winter break, and I was just kind of looking for something to do over the summer,” said Evans. “Since I’m a political science major, I thought that interning for Senator McCain would be something that’s worth doing.

“Generally, we answered the phones and organized files,” he added, “[but] there was a lot of stuff that we had to deal with that was out of the ordinary for other interns in previous summers.”

For example, Congress proposed several versions of a health care bill that would

have revised, or all together repealed, the standing Affordable Care Act law. Then, in July, Sen. McCain announced that he had been diagnosed with glioblastoma, a cancerous brain tumor. McCain told reporters that his prognosis was “not good.”

“The massive overflow of voice messages and questions about important legislative actions such as the health care bill were definitely out of the ordinary,” said Evans.

He singled out answering the phones as one of the more difficult aspects of the internship.

“There were people that were calling in [who] were saying some pretty mean stuff even after [McCain’s] diagnosis, and that was pretty sad,” said Evans. “But it just goes to show how politicized everybody in the country is.”

Although he wasn’t able to divulge specifics, Evans cited his interactions with constituents as one of the more interesting duties that he handled as an intern.

“It was really cool to hear people’s stories and see how you [could] help,” said Evans. “It was also very eye-opening seeing how sometimes you can’t help and seeing what people go through.”

Though Evans is a political science major, working for McCain actually pushed him in a different academic direction. After experiencing the chaotic nature of governmental operations in today’s age, he has found himself feeling more passionate about other fields.

“The internship definitely opened my eyes to so many different aspects that go into politics,” Evans said. “It kind of directed me away from politics but more towards business and law. I’m probably going to work in the business side of things for a couple years until I decide which route of graduate school to pursue. I’m either going to get an MBA or my law degree, but I don’t think I would ever consider myself for political office.”

While interning for McCain may not have convinced Elliot Evans to run for office, he still enjoyed the experience.

“[McCain] is an American hero and everything that he’s done for this country is amazing,” said Evans. “Working in his office and seeing where he goes gave me a stronger appreciation for everything that he does, and it was just impressive to see the actual physical space where he and his staff work to make such a big impact on our country.”