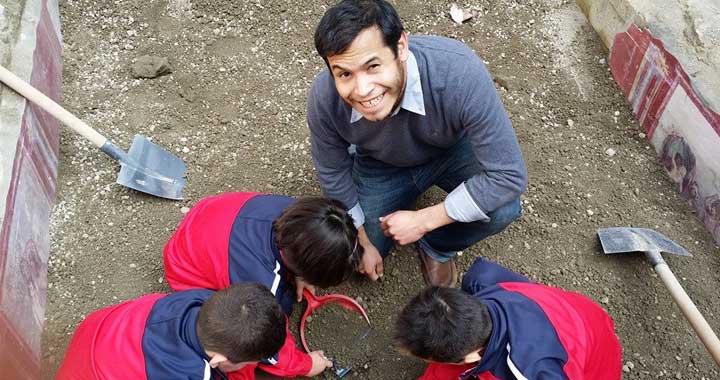 When Mt. Vesuvius erupted in 79 A.D., Pompeii was not the only city buried in the ashes.

Stabiae, the site of a cluster of Roman villas belonging to the empire’s elite and wealthy, was also entombed in dust. Nearly 2,000 years later, a UWM student has been helping to uncover it.

Taylor Layton is a History and Religious Studies double major who has spent portions of the last three years working at the Ancient Stabiae site on the southern coast of the Bay of Naples. His parents took an Italian cruise in 2008 and visited the Stabiae dig. When Layton began to look for an internship in 2014, they suggested the ancient Roman site.

“I was put under the lead archaeologist and Dr. Thomas Howe, who is the site architect. They taught me all the components of site management and how to become not just a scholar, but how to make a site sustainable and work with the surrounding community,” Layton said. “It was a really good opportunity to go over there and learn all about site management. That’s what really drew me to Stabiae as opposed to Pompeii, where you’re only going to excavate one thing, or you’re only going to write an article on some artifacts.”

Layton completed an eight-month internship at Stabiae during his first year. He learned to use a laser scanner to map areas of Stabiae that may be unsafe for actual excavation. The next year, he was invited back to Stabiae to teach other students how to use the technique. He spent this summer in Stabiae teaching and conducting his own independent research. 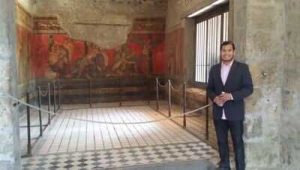 Laser scanning is digital technique that both makes archaeological sites safer and quicker to process. Layton and other archaeologists use lasers to map the cracks and crevices of villa walls. The lasers measure the wall elevations and create a visual that would take an artist a year to hand-sketch.

Through laser imaging, Layton said, “We can see clearly there are different stages of architectural construction. We also use it to build a virtual model … that allows us to travel to anywhere in the villa and look at it in three-dimensional space, which is very useful for scholars trying to replicate a Roman atrium or something like that.”

Layton’s own research interests are much smaller.

He looks at the household shrines, called lararia, where Romans practiced religious rituals to honor the household’s personal gods – essentially well-wishers of the family that people could pray to in times of sickness or misfortune.

“Religion is a major component that bypasses the social strata. Although it’s administered by the elites and practiced by the lower classes, it’s still a participatory thing where everyone involved is interpreting it in their own way,” Layton said of his interest. “I think little by little, scholars are including the people in the peripherals – freemen, slaves from all over the world. Their accounts are not really in literature; they’re omitted for the simple fact that only a small percentage of the population was literate. When you create the visual fabric of a place like this, it gives a scholar a chance to see what everyone was seeing, not just the wealthy.”

Layton himself became interested in history because his personal history is one that’s often overlooked. He is from a native population in Paraguay whose stories are passed down orally. As their territory shrinks due to commercial expansion, Layton worries that they will be left out of the historical record.

Meanwhile, he is helping to make Stabiae a permanent part of the record. Through careful site management – coordinating digs so that the ancient structures remain intact, building roofs to divert water from troubled areas, working with local Italians to encourage community involvement, and the like – Stabiae is on track to become an archaeological park similar to Pompeii.

Eventually, Layton says, people will be able to tour the site to see places like the Villa San Marco and the Villa Arianna and discover what life was like nearly 2,000 years ago.

“I didn’t realize there were so many perspectives that contribute to the interpretation of archaeology and the villas themselves,” he said. “At first, I was under the impression it was just an archaeological site that needed excavations and recording done. Once you arrive, you realize that the questions are endless and it’s up to how fast I can interpret software.”