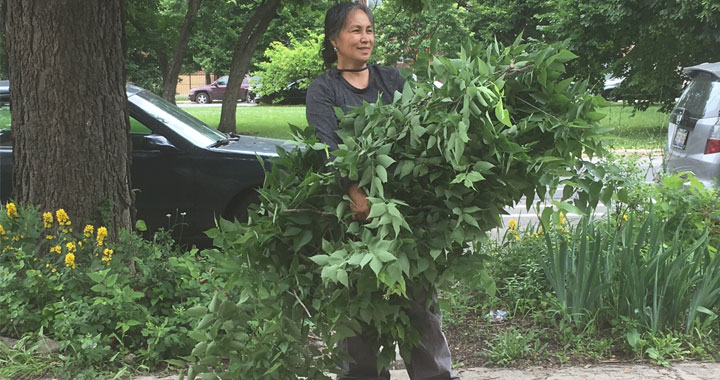 Spanish alumna Annamaria León takes pruned tree branches to use at the base of a hugelkultur in her North Lawndale neighborhood in Chicago. Photo courtesy of Annamaria León.

A neighbor recently knocked on Annamaria León’s door. What, he asked, was she planning to do about the weedy lot on the side of her house in Chicago’s North Lawndale neighborhood? León laughed; she’s already done quite a bit with the “weedy lot.” It’s been an urban food forest for the past seven years, filled with fruit trees, berry bushes, and over 150 species of pollinator-attracting perennials.

Edible landscaping and permaculture are concepts gaining popularity in urban centers around the country. Food forests are like miniature ecosystems, containing multiple varieties of fruits and edible perennials planted together in up to seven layers for the most efficient use of space.

“This is a way to fully integrate, at different layers and every angle, food,” she explained. “With this model, oftentimes, people don’t even know they’re in a community garden. It looks like a big weed patch because it’s something unrecognizable to them until they get a guided tour of what’s happening. All of a sudden, their eyes light up and then they see that there really is a design in the apparent chaos. 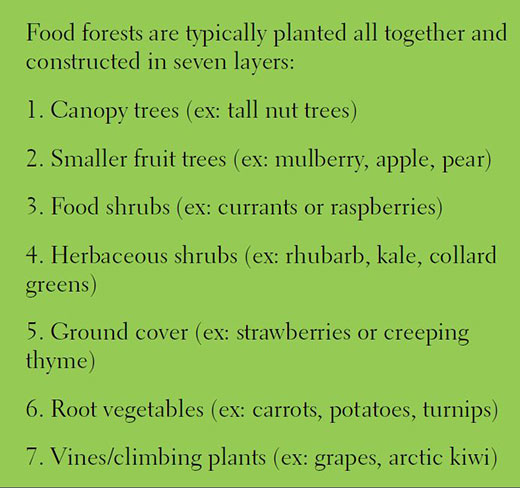 “Not only do we produce much more diversity,” she added, “but food forests also really positively affect peoples’ mental and physical health and nutrition.”

She would know; León’s been planting and advocating for food forests in Chicago for years. Most recently, she was the Edible Landscapes director at Christy Webber Landscapes Farm & Garden Center, but León left that position this year to co-found Homan Grown, a wholesale perennial and tree nursery that also offers landscape and design services.

It was a roundabout journey from college to owning her own company.

León is the daughter of two Filipino family practice doctors. Born in Manila, her family immigrated to Brown Deer, Wisconsin, when she was a child. León began college at UW-Madison with the intention of becoming a physician like her parents, but she discovered that both the field and the school weren’t the right choices for her. She transferred to UWM and graduated in 1988 after majoring in Spanish with minors in French and Comparative Literature.

She held a series of customer service positions in different industries, but when she was laid off in 2008, León decided to nurture her green thumb. She took a part-time position working at a Christy Webber Farm and Garden retail store while she took classes through the University of Illinois Extension to become a master gardener. After that, she earned her permaculture design certification in Bloomington, Indiana, and then became certified in sustainable horticulture and sustainable agriculture through an apprenticeship program called Windy City Harvest.

As she got further involved in the landscaping industry, León found herself grateful for her Spanish major.

“There are many people in landscaping and corporate agriculture who are Spanish-speakers. I rely a lot on my ability to communicate to other workers,” she said.

designed an edible landscape exhibition in Chicago’s Millennium Park and spent four years teaching private businesses, municipalities, and homeowners how to plant food forests. Now, she leads Homan Grown with her business partner, Jeff Levrant. Her husband, internationally-recognized perennial plantsman, author, and landscape designer Roy Diblik, is a consultant and mentor to the company.
Homan Grown is a way that León can not only encourage permaculture, but also have a positive impact on her industry and community. The company aims to add more sustainable greenspace to Chicago and to address a shortage of gardeners who have the proper knowledge to care for sustainable agriculture models and naturalistic landscapes.

One way they will do so is by partnering with READI Chicago, a program that seeks to reduce gun violence by connecting people in high-crime areas with job-training, employment, education, and mental health resources.

“There are only a few industries open to people who may have felonies or other barriers to employment, and one of them is landscaping and the greening industry,” León said. “We’re looking at employing these people after they complete the READI program in 2019. … Being a steward of the earth can transform peoples’ relationship to who they are for the world and who they are for themselves.”

She hopes that her future employees, and the city of Chicago as a whole, will come to embrace permaculture and food forests, and not just for the sake of her business. Urban greenspace has been shown to have positive impacts on peoples’ mental health and correlates with lower crime rates. Also, León added, urban forests can help combat the effects of climate change by helping to slow down and filter excessive rainwater during harsh downpours.

And, of course, food forests are full of tasty treats.