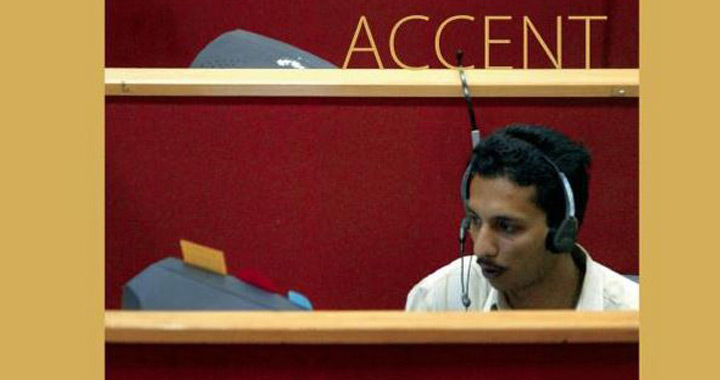 A future is unfolding in India’s call centers.

That’s according to UWM Associate Professor of Sociology A. Aneesh whose newest book, Neutral Accent: How Language, Labor, and Life Become Global, was published in May. The book explores Aneesh’s observations from his time working in an Indian call center and comes to an interesting conclusion: If you want to figure out where global society is headed, watch the people on the phones across the world.

“Call centers become sort of emblematic of what everyone’s life will be,” Aneesh said. “Many features of call centers are actually features of modern life, in some ways.”

Aneesh has always been interested in international labor; his first book, Virtual Migration: The Programming of Globalization, explored the migration of foreign software developers into the United States. Neutral Accent picks up where the previous book left off. Aneesh spent a year researching call centers and even worked in one for four months during 2004-05, when he was in India on a MacArthur Grant. He laughs when he says he had to leave his doctoral degree off of his résumé at the risk of appearing overqualified when he applied for positions.

During his work, he found that many aspects of call center culture are being replicated around the world.

Take, for example, the hours. Call center workers cater mainly to western countries – Australia, Great Britain, and the United States, all of which are hours ahead or behind India’s time zone. Workers start their work days around the time day-laborers head home and get off in the wee hours of the morning.

That trend is being echoed worldwide, Aneesh says, as night and shift work becomes increasingly prevalent.

“There are so many workers working at night. Not just nurses … or obviously emergency workers, or healthcare workers. But with a 24-hour economy … (there is) some startling evidence that this is becoming the majority norm in the west,” Aneesh said. Tellingly, prescriptions and over-the-counter drugs for sleep disorders have registred a dramatic rise in the last decade.

Or took a look at the title of the book – neutral accents. English is a second language for many call center workers. They are trained to neutralize their accented speech so that emphasis is placed on syllables in a cadence English speakers are familiar with, and so that workers can recognize common slang and idioms like “dude” and “geek.” Even the workers’ identities are neutralized; Sanjeet might go by the name Tim while he’s working because a familiar-sounding name plays better over the phone.

Now that communication and commerce are global, Aneesh predicts that more and more, speech and identity will need to be neutralized so that people the world over can understand each other.

“We don’t know how what we are going to say will be (interpreted) by the other person in the end. … Communication is an improbable event,” Aneesh said. “In the case of cross-continental, over-the-phone conversation, where there’s no body language and no cultural norms in place, how can you communicate?”

Beyond the very human adaptations playing out in call centers, there are digital changes as well.

“I started realizing that at the other end too, personalities have already been changed without our knowledge. It’s not the agent who’s dialing the number; it’s a software program called a dialer that dials the number based on specific profiles that are culled from customer relations databases. … It picked up that you’re a certain age, certain demographic, living in a certain area, and you might have certain needs,” Aneesh said. “In the previous book I came up with the idea of ‘algocracy,’ which is the rule of the algorithm. … It’s a governance through algorithms. The algorithms decide who to call. For that to happen, a certain digital system identity has to be built up in contrast to a social identity. I realized that most of us have system identities. We don’t think that way, but that may have even more effect on our life chances than our social identity.”

In essence, our digital presence, through our tax forms, credit history, medical reports and more, and the algorithms that make use of those markers, will become increasingly important – our face-to-face interactions and social networks, while still important to us, will have slightly less functional value. It’s another way that call centers hint at a changing future, Aneesh says. The idea of Neutral Accent hints at another form of futrue communication where, instead of neutralizing the thick accent of a call center agent, communication will be mediated through program avatar interfaces. We can already see hints of this phenemenon in everyday, routine communication with computer-based systems – think banks, airlines, and smart phones.

It’s hard to make any sort of judgement call about these changes. Biologically and sociologically, Aneesh notes, phenomenon like night work and neutral identities represent a negative, but economically, they’re valuable assets. It’s just another hallmark of an increasingly global society; there’s no one vantage point from which you can completely condemn anything. That will only grow as the world becomes at once more connected and differentiated.

“The impact was that globalization (has become) known to people in a very personal way,” Aneesh said. “When you call your bank, the phone might be ringing across the planet.”