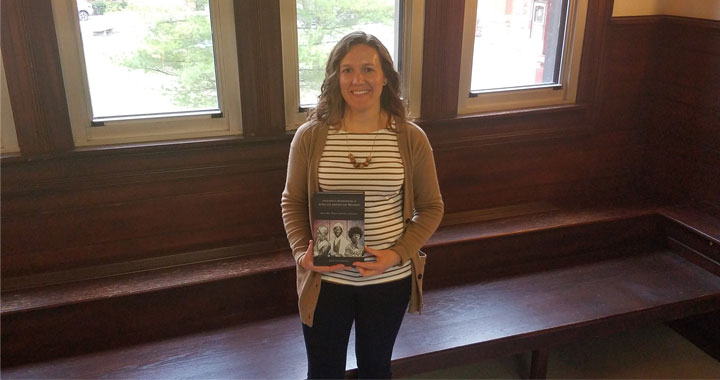 At first glance, children’s biographies seem pretty innocuous. Detailing the life and achievements of influential people, they’ve been the subject of countless book reports over the decades.

But look closer, says UWM Communication assistant professor Sara VanderHaagen, and hidden in the pages are hopeful messages to young readers: You, too, can change the world.

“Biographies are immensely powerful in the United States; they’re in all the libraries, in all the classrooms,” she said. “At the same time, they’re dismissed by children’s literature scholars as ‘not scholarly enough.’ They’re not really understood in the same way by education scholars because they’re primarily thinking about what reading level this biography is at.”

That’s a mistake, she argues in her new book. Published in November, Children’s Biographies of African American Women: Rhetoric, Public Memory, and Agency examines biographies of Phillis Wheatley, Sojourner Truth, and Shirley Chisholm and how the rhetoric in each encourages young readers to be changemakers working to make a positive impact. The book is available at https://bit.ly/2DJkCIh.

The book grew out of VanderHaagen’s dissertation for her doctorate, completed in 2010 at Northwestern University. She chose to focus on Wheatley, Truth, and Chisholm not only because they were each trailblazers from different time periods – the first African American to publish a book of verse, an outspoken abolitionist and feminist, and America’s first black Congresswoman, respectively – but also because she felt it important to promote the voices of African American women, a group that has often been forgotten or outright silenced in American history.

And, of course, there were plenty of children’s biographies written about them.

VanderHaagen’s book explores those biographies through a new lens adapted from philosopher Paul Ricoeur, who advanced the idea of “three-fold mimesis” (see https://stanford.io/2QqmzA2 for more detail). It revolves around three elements of historical narrative texts: Prefiguration – determining what a particular culture defines as action – Configuration – how a storyteller constructs a narrative about that action – and Refiguration – how audiences are invited to use those stories as inspiration to act in their own lives.

But, she adds, writers have to use rhetoric to inspire that action in their readers. It turns out that children’s biographies have found ways to do just that.

Many times, VanderHaagen says, books will ask young readers to envision themselves in Wheatley or Truth or Chisholm’s shoes – ‘Could you imagine doing such a thing?’ is a common question. Many books list questions to think about at the end of each chapter.

“In others, it’s subtler. A lot of these texts have a concluding paragraph or chapter called something like, the ‘The legacy of…’” VanderHaagen said. “It will tell you about how there was a Mars rover named after Sojourner Truth. There was a stamp for her and there’s a giant statue of her in Battle Creek, Michigan – all of those kinds of commemorative things. They do that to demonstrate that these people are worthy of remembrance.

“Sometimes they’ll go beyond that and say, ‘How do we remember these people rightly?’ We remember them rightly by continuing their work. How could you continue to do the kind of work that they did?”

Those direct invitations to action are encouraging children to think about their own agency and ability to impact the world around them, VanderHaagen argues. Though, these books are not without fault; she notes that some promote a “pull yourself up by your bootstraps” message that ignores the societal support that made many of these women’s achievements possible.