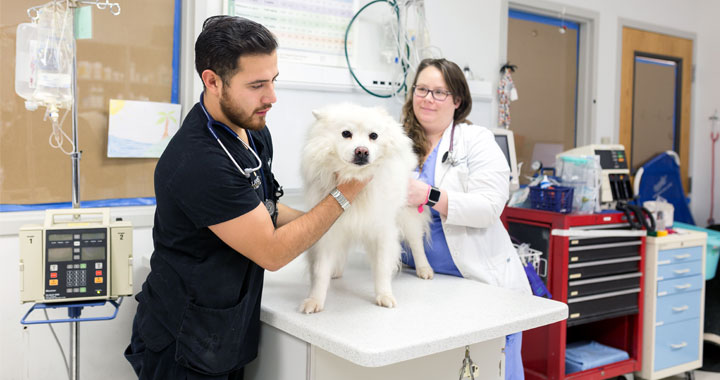 When Juan Orjuela talks about his patients, he describes them like they’re real people. And to him, they are.

“I think the bond with animals is so unbreakable, unlike any other,” he said with a smile. “There’s so much conflict with humans, but with animals, it’s consistent love and affection.”

Orjuela is a Pre-Veterinary student at UWM majoring in Biology and Conservation and Environmental Science. He is also a veterinary assistant at Lakeshore Veterinary Specialists in Glendale, Wis., where he triages patients, assists with the placement of IV catheters, and helps doctors and technicians around the clinic.

It’s a dream job for Orjuela, who has wanted to become a veterinarian for as long as he can remember. Orjuela’s family immigrated to Minnesota from Bogota, Colombia, when he was a child. He grew up in Minneapolis and decided to attend UWM because he wanted to try out a new city, but Orjuela initially had no idea that there was a pre-veterinary program on campus.

“I feel that a lot of people disregard UWM pre-vet students because of UW-Madison’s strong veterinary program,” he said. “I made it my mission throughout my undergraduate years to make the persistent community of pre-vet students known on campus. I decided to reestablish the Pre-Veterinary Medicine Organization, and I’m the president.”

Through the Pre-Veterinary Medicine Organization, Orjuela and other pre-vet students on campus have been able to talk with admissions counselors from several vet schools and hear from professionals in all aspects of the field. Those contacts helped him become a lab animal technician at the Animal Resource Center on UWM’s campus, and that experience, plus an internship at UC-Davis School of Veterinary Medicine, helped Orjuela land his job at Lakeshore Veterinary Specialists. 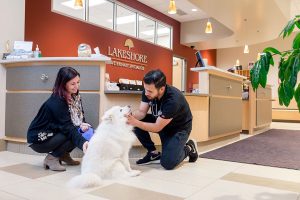 Juan Orjuela says goodbye to a furry patient at Lakeshore Veterinary Specialists. Orjuela is a pre-vet student at UWM.

“Lakeshore’s mission is to support a collaborative workplace built on communication, compassion, and continuing education in order to deliver progressive medical care for pets, their people, and our community,” said Christina Matthews, the hospital manager at Lakeshore Veterinary Specialists.

“It’s a very fast-paced environment. We only see animals who are in very bad situations: they got attacked by a dog, or they come in not breathing and we have to immediately initiate CPR. It could be anything,” Orjuela added.

One case that especially stood out to him involved a pit bull who had been attacked by another dog – or who was possibly a victim of underground dog fighting. There’s no way to know, Orjuela said, but the animal was in bad shape.

“People associate such a stigma with pit bulls and think they’re really dangerous animals, but this pit bull, like most, was the most genuine, sincere guy. He knew we were there to help him, even though he was in a lot of pain,” Orjuela said. “That’s one patient I’ll always remember. He taught me a huge life lesson – sometimes you can be in the worst situation, but having a positive attitude can alleviate a lot of the negativity.”

Orjuela plans to graduate in May and begin applying to veterinary schools. His hope is to attend Cornell University’s College of Veterinary Medicine and to specialize in small animal soft-tissue surgery. He has the full support of his current bosses.

“Juan is a valued member of our Lakeshore family,” Matthews said. “His passion for veterinary medicine inspires all of our team members, from technicians to doctors. We look forward to Juan becoming a veterinarian and continuing to expand the capabilities of veterinary medicine.”

The job is important, Orjuela said, because animals have no way to say what ails them. They need someone to speak for them.

“Being able to help them, assist in diagnosing and treating them, and then see their progress, is the most satisfying part of the job,” Orjuela said. “We see a lot of sad cases, and when we get good results, that’s what makes all of the long hours at Lakeshore worth it. I like learning every day how to become a voice for all of these animals.”

Research opportunities at UWM start before you even begin school