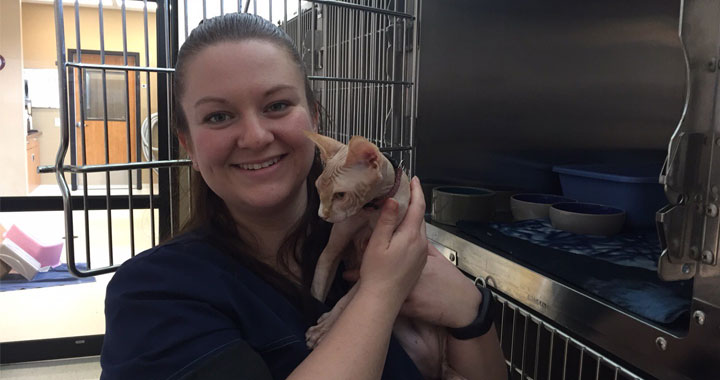 Pre-vet alumna Haley Jansen cuddles with a patient at the Appanasha Pet Clinic. Jansen is a veterinarian at the clinic. Photo courtesy of Haley Jansen.

Haley Jansen had to fail a few times to reach the success she’s found today.

The first time was when she bombed a standardized test (Jansen admits she’s not a great test-taker) and her college of choice, UW-Oshkosh, wanted to place her in a remedial math class. She transferred to UWM instead and found herself on the pre vet track.

And then she failed her veterinary board exam after four years of vet school.

“It happens to some people and you have to deal with it. I won’t lie; it was the worst news I’d ever gotten,” Jansen recalled. “I had to work for a year as a vet tech. But, that year was so helpful.”

It gave her experience as she learned to navigate the working world and veterinary care. She learned about clinic operations, animal care, and other tricks of the trade that made her an attractive hire when she passed her boards on the second try.

“It prepared me for what real life was really like,” Jansen said. “It was hard to have that failure, but it helped me hit the ground running.”

Today, Jansen is seeing furry patients at the Appanasha Pet Clinic in Menasha, Wisconsin. It’s been her life-long dream to work as a veterinarian.

“When I was very tiny, people would ask me what I wanted to be when I grew up and I would say, I want to be an ‘aminal’ doctor,” Jansen recalled. “I always had pets that I played ‘Animal Doctor’ with. Luckily they were all pretty good pets.”

She took the first steps toward her dream career at UWM, where she entered the pre-vet track and majored in Biology. Jansen still recalls how her professors were willing to meet her one-on-one to answer questions beyond the scope of her classes.

She was also involved in UWM’s pre-vet club. The club often brought in speakers to talk to students about what to expect in vet school and how to further their careers. The advice was invaluable when she graduated from UWM in 2011 and began veterinary school at the University of Minnesota.

Like medical school, veterinary school is a mix of classroom learning and clinical rotations. Jansen did rotations in radiology, dentistry, surgery, and more to learn every aspect of animal care. Her favorite rotation was internal medicine.

At the Appanasha Pet Clinic, though, Jansen is a general practitioner who focuses mainly on dogs and cats. Her days are a mix of wellness exams, check-ups for sick or injured patients, and surgeries – mostly spays, neuters, and dental cleanings.

There are challenges; it can be heart-wrenching to see a family have to part with a beloved pet when they can’t afford a surgery or treatment. It’s also difficult when Jansen can’t provide a diagnosis for worried owners. Animals can’t communicate so it’s difficult to pinpoint a specific cause for a particular ailment. Sometimes all Jansen can do is treat a patient’s symptoms.

And then there are the funny – and dramatic – moments.

“There have definitely been cheating boyfriends or girlfriends who were found out when the dog ate somebody’s underwear,” Jansen said.

Overall, though, the job is very rewarding, especially when a dog or cat who was doing poorly makes a full recovery.

“I remember diagnosing diabetes in a cat. It doesn’t always have to be a miraculous surgery. Just figuring out the little things can make people so grateful,” Jansen said. “You’re very happy to see a family happily taking their pet out the door.”

She has some advice for aspiring vets. No. 1, be prepared for the amount of debt that veterinary school brings. And No. 2, be persistent, even in the face of failure. It’s hard to get into vet school and some people have to apply multiple times. Ask questions and be willing to take criticism to improve.

Are we truly equal? UWM philosopher thinks not