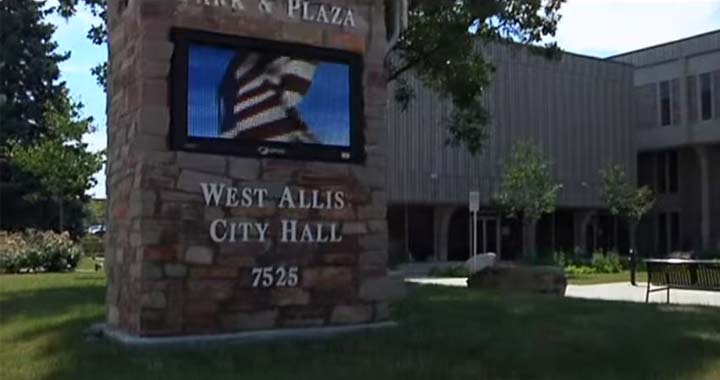 He’s quick to point out the Milwaukee suburb’s strengths – it’s the second-biggest city in Milwaukee County, home to an increasing number of unique local businesses. West Allis has some promising development prospects and plenty of affordable housing with friendly neighbors.

Admittedly, Devine is biased – he’s the mayor, and a UWM graduate.

He grew up in Racine and began attending UWM as a business major. Math courses weren’t his cup of tea, so Devine switched his focus to Political Science. He remembers his time at UWM with a smile.

“I worked on campus. I worked at the union loading dock, right off the bridge that goes over. I’m still friends to this day with the guys that worked there,” he said. “I was on the Student Association, the student senate. That was my initial foray (into government).”

Devine graduated with a Bachelor’s degree in January of 1995, and promptly did not go into government. Instead, he entered the world of marketing and sales with the Midwest Sports Channel, which is now Fox Sports Wisconsin. He worked there for a few years but didn’t see a future in the industry. It was also just about the time that a pension scandal rocked the Milwaukee County Board. Several County Board members were recalled, and Devine’s acquaintance, Gerry Broderick, now a Milwaukee County Supervisor for the 3rd District, won one of those races. Devine asked for a job.

He served as Broderick’s legislative aide for two years, during which time he moved to West Allis. Devine ran for a seat on the Board himself in 2004 and served as a County Supervisor until 2008, when then-mayor of West Allis Jeannette Bell announced she would not seek re-election. People asked him to consider running.

“I always had an interest in politics, but I didn’t really change my major to Political Science thinking I would run for office someday,” he said. “Now I’m coming up on my third term next April and I will be running again.”

As mayor, Devine looks at himself as the CEO of West Allis, with the city administrator as the COO. His biggest job is working with city administration to put together an annual budget that uses taxpayer money to fund city departments and programs. He also presides over City Council meetings and conducts media relations.

“The thing I really like is that every day is different. I don’t have the same schedule ever,” Devine said. “The worst aspects are there is never enough money to implement great ideas. … That’s frustrating, because there are a lot of things I’d love to do in this city that I just can’t.”

What he can do – and Devine does it enthusiastically – is promote West Allis as a good place to do business. He acknowledges that the city has a reputation as a worn-out industrial town, especially since its largest employer – and taxpayer – Allis-Chalmers closed decades ago, but Devine thinks the city’s critics are far too pessimistic.

“It has affordable homes for young families who are working for their first house. Our farmer’s market is top notch. We’ve got some really nice development prospects right around there that interest the paper like BizTimes or Business Journal. We’ve got six developers that are putting together proposals and that’s kind of cool,” Devine said. “We are always seeking grants to try to facilitate growth and development in the community. When I look at the things like the restaurants, the delis, the coffee shops, the craft brewery, the art space, Cream City Clay, the skate park – we have a lot of cool things that are popping up.”

He credits UWM for his well-rounded education and encourages current students, especially the politically-minded, to get involved.