L&S / All News / Physicists’ partnership is charging into the marketplace

Physicists’ partnership is charging into the marketplace 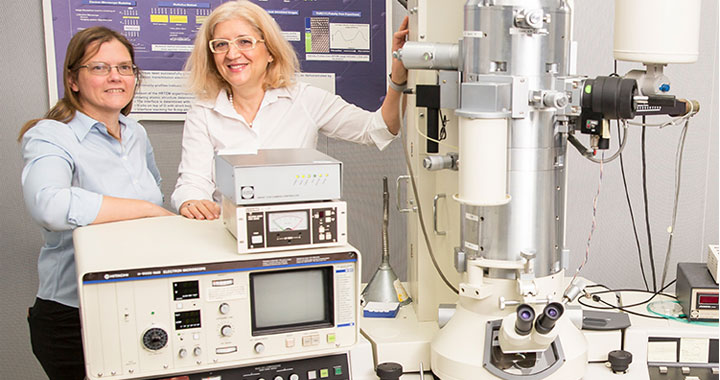 Professors Carol Hirschmugl and Marija Gajdardziska formed a startup company called SafeLi with the goal of breaking into a market hungry for improved lithium-ion batteries. Their graphene monoxide material would replace commonly used graphite in a battery’s anode, allowing for novel, lighter and safer anode materials that will charge faster and store more energy.

It has other advantages, too, because it can solve a problem with silicongraphite, which has great potential as a next-generation material in anode research.

battery’s capacity. But silicon massively swells and shrinks during charging and discharging, causing it to break up quickly. Graphene monoxide is a better match with silicon because it does not swell when it takes up lithium, and the new material’s flexibility compensates for the expanding silicon.

“Through Hirschmugl and Gajdardziska’s efforts, the mechanism of lithium insertion into graphene monoxide and silicon anodes will be understood, and that will help their startup remain competitive in this crowded market,” UWM professor of Mechanical Engineering Deyang Qu says.

To learn how to think like entrepreneurs, the physicists, including team member Marvin Schofield, joined the Milwaukee I-Corps program. A partnership of five area universities, I-Corps trains academics how to turn ideas from lab research into products and startups. Administered by UWM and funded by the National Science Foundation, it’s the only I-Corps site in Wisconsin.

“I-Corps taught us how to get potential customers to tell us what is needed to gain a market share,” says Gajdardziska, who is also dean of UWM’s Graduate School.

Through I-Corps, the team met mentor Loren Peterson, an entrepreneur in UWM’s Lubar Entrepreneurship Center. They also met with top companies in the battery field, like locally based Johnson Controls. The researchers subsequently were accepted into the national I-Corps program in the Silicon Valley cohort, giving them access to people in companies like Tesla, Apple and Samsung.

“I-Corps made our startup possible in a way that we never would have expected,” says Hirschmugl. “It is turning physicists into entrepreneurs.”

Is your ZIP code your destiny? Maybe, says UWM Sociologist