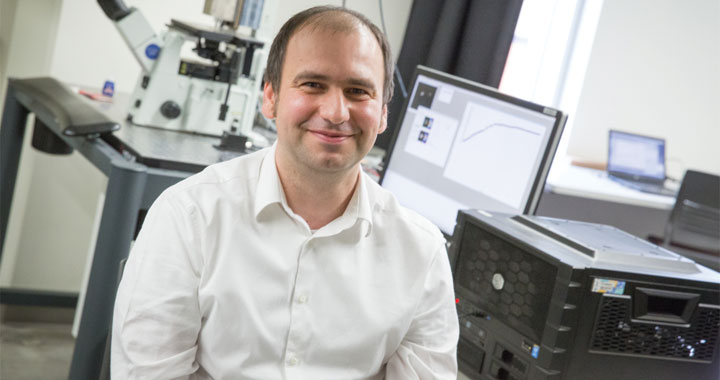 UWM biophysicist Ionel Popa is investigating how proteins carry out their essential work – a shapechanging process called “protein folding.” A better understanding of protein folding holds insight into some diseases, including cancer, which begin when a protein misfolds, he says.

He is using the $200,000 grant to investigate how proteins assemble and change while folding and unfolding at the cellular level in order to accomplish an enormous number of bodily functions. In particular, he wants to know how mechanical forces at
specific sites inside the body affect proteins as they fold or unfold.

Think of a protein as multiple knots on a rope. When they are “folded,” all the knots

By increasing the amount of force, you expose more sites that can form more linkages. A protein domain is 4 to 5 nanometers, but can expand to between 10 and
50 nanometers, depending on the force applied. It’s like construction of a building. You connect to what’s there, reinforcing as you add floors.

We’ve built our own instrumentation, called “single molecule magnetic tweezers,” to explore protein folding. Using magnetic tweezers, we can make a synthetic protein and then apply forces in a lab setting to test a particular physical process by tethering it between a glass surface and a para-magnetic bead. Since we can’t see the molecule changing, we measure the position of a para-magnetic bead that is attached at one end, and that of a non-magnetic bead, glued to the surface. Then we apply a magnetic force and measure the unfolding and refolding of each protein.