PhD grad gets Fulbright to study the foibe 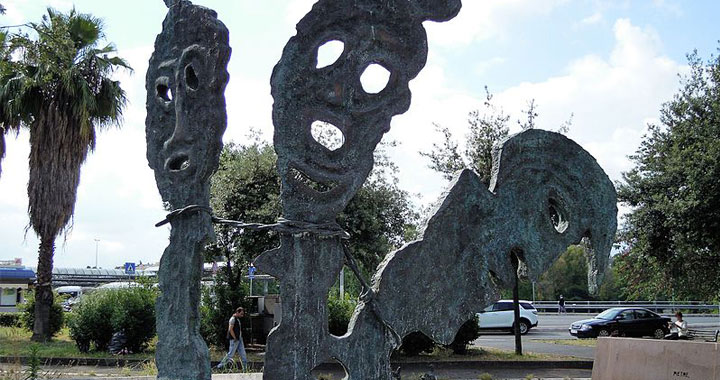 A monument to the victims buried in the foibe along the Italian/Slovenian border stands in the Giuliano-Dalmata district of Rome.

On the border between Italy and Slovenia are a series of vertical caves called foibe that were used as mass graves during World War II. Italy recently constructed a monument honoring the victims of what the country calls “an Italian genocide,” an ethnic cleansing of Italians killed by Yugoslavian forces under the communist leader Tito during the war.

There’s just one problem – according to Slovenia, the bodies recovered from the foibe are also Yugoslavians killed by Tito’s forces, as well as Italian Fascist officials. This calls into question Italy’s “genocide” interpretation that suggests Italians were killed just for being “ethnically” Italian.

And therein lies the focus of Louise Zamparutti’s Fulbright award for her research,

“The Foibe in Slovenia and Italy: Identity, Division, and Reconciliation.” Fulbright awards are the premier educational grants for international study and research.

“[For the Fulbright,] I’m researching what Slovenia thinks of the Italian interpretation of the foibe and looking at some ways to provide reconciliation,” Zamparutti said. She graduated with her PhD in English this month.

The project grew out of her doctoral thesis, which focused on the initial controversy surrounding the Italian monument to the foibe. The country was fiercely divided about the historical facts surrounding the burial sites, and the monument, championed by the far-right movement in Italy, was the subject of deep political rancor. By the time it was built, however, the nationalistic sentiment driving the project had been normalized.

Zamparutti was presenting her research on the monument at a European conference when a colleague suggested that she apply for the prestigious grant. Zamparutti had to submit a research proposal, find a Slovenian university to sponsor her, and gather references from Slovenian academics.

She found out she’d been selected on April 12, after she’d already accepted a tenure-track position teaching English at UW-La Crosse.

“I was stunned,” Zamparutti said. “I just sat there and stared at the email.” Zamparutti will put her teaching career on hold for a year while she lives and studies in Slovenia. She has high ambitions for her research focusing on how Slovenians are reacting to Italy’s version of the foibe.

“They have made attempts at reconciling with Italy, and the Italians have not been very responsive,” Zamparutti said. “I’m very interested in talking with young people, high school and university students, and finding out what they learn about World War II in their classes. I also want to talk to the oldest people I can find – World War II survivors or their children.”

Though she doesn’t expect to solve all of the region’s problems through her research, Zamparutti hopes that her work might help people of both countries understand each other a little better in hopes of future reconciliation.