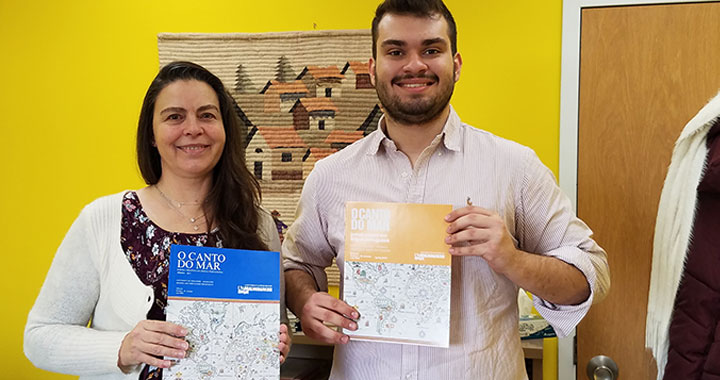 Portugal, Brazil, Angola, Mozambique, and other Portuguese-speaking countries may be separated by thousands of miles, but they’re all connected by the oceans.
So when it came time to name their literary journal, UWM’s Portuguese students chose “O Canto Do Mar” – the song of the sea.

O Canto Do Mar is a creative writing journal steered by Portuguese speakers in UWM’s Department of Spanish and Portuguese. Featuring submissions from UWM students and members of the Milwaukee community alike, the journal has just one guideline: all entries must be written in Portuguese.

“We have articles about music, about food, about places, about Portuguese cultures. We have poems. We have literature,” said Susana Antunes, UWM’s Portuguese language coordinator and one of the editors of O Canto Do Mar.

The magazine started in part because of Japanese poetry. In the spring of 2017, Antunes asked one of her classes to write a haiku in Portuguese.

“The following class, they brought their haikus, and I was fascinated. I was like, I can’t stay with these beautiful haikus in my pocket. We have to do something to spread these beautiful, short poems to the community,” Antunes said.

Around the same time, Luis Filho was practicing his own creative writing and looking for an outlet to publish it. A Brazilian native, he moved to the United States to major in journalism at UWM. He also found a home in the Department of Spanish and Portuguese, and he’s completed a minor in Portuguese.

“I was taking a class here on editorial design in (the Department of Journalism, Advertising, and Media Studies). I was just learning to work with this kind of platform to make magazines,” Filho said. “I thought, okay, this is the very best moment to start working on this.”

The idea for O Canto Do Mar was born out of Antunes’ and Filho’s mutual desire to share the creativity of Portuguese language-speakers. They solicited submissions from both students taking Portuguese classes and from non-students who attend Bate-Papo, the weekly Portuguese language table where students and community members meet to converse. Antunes says that she’s even had alumni and students from UW-Madison submit work.

Some students, she added, will even submit the compositions they write for her classes.

“For us it’s great, because it’s something that the students work on with the idea to be published,” she said.

After soliciting submissions, Antunes edits the pieces and Filho designs the publication. The two editions that have been published so far are online on the Department of Spanish and Portuguese’s website (https://bit.ly/2R9QaOy).

And, Antunes added, with support from UWM’s Center for International Education, they were able to print physical copies of the journal as well. That sparked a lively debate among members of Bate-Papo about what the cover should look like.

“When I got the physical copies, I gave it to the contributors. They said, oh my gosh, this is the first time I have something published,” Antunes said.

It may also be the first time they have something archived; Antunes reports that O Canto Do Mar will be included in the UWM Library’s Archives and Special Collections. That includes the upcoming 2019 spring edition, which Antunes anticipates will have more than 30 contributors.

For Filho, the journal has given him and his classmates a chance to flex their creative muscles.

“Since I was a kid, I was very passionate with literature. I always loved to read and to write,” he said. “I think the nicest part of this is that a lot of people who write for this journal, they’re not 100 percent affiliated with literature. Many are taking this course because they have a language requirement (for graduation), and they’re fulfilling it with Portuguese. Usually, it’s people who have no idea they can do a creative work, but (this) gives them the opportunity to say, I can express myself as well.”

“It’s more than writing and a journal,” Antunes added. “We love literature. We love the Portuguese language. We love writing. We love to spread the word about creativity. It’s kind of a love story.”