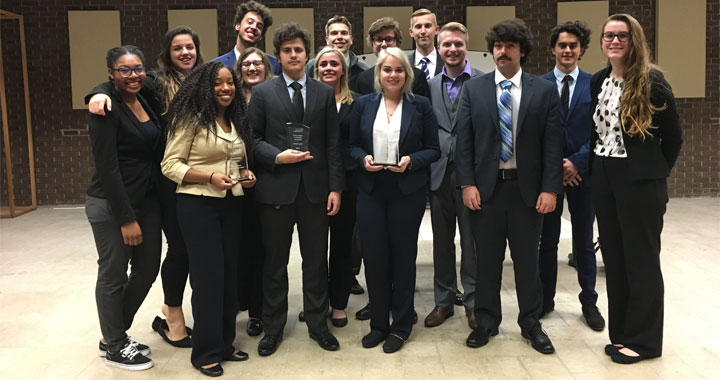 Mikayla Ness’ last court appearance was when she presented arguments in a bribery case. This time around, she’s preparing to argue an age discrimination lawsuit.

It’s a big responsibility for someone who’s never been to law school.

Ness is an Anthropology major and the president of the UWM Mock Trial team. Mock Trial is a nation-wide organization that mirrors the actual justice system by asking students to pose as either attorneys or witnesses to argue hypothetical cases. They are given all of the regular court documents – case law, witness affidavits, evidence exhibits – and must follow all of the regular rules of the courtroom.

“We go through the procedures a real trial would go through. We do an opening statement, direct questions, cross-examination, and closing statements,” Ness said. “We get scored, but at the end of the day, it’s not so much which side would have won. The presentation is the important part.”

UWM boasts one of the nation’s oldest Mock Trial programs and is coached by criminal defense attorney and UWM lecturer Brad Bloch. The team competes in up to seven tournaments throughout the school year, including a regional tournament during the spring semester. The top teams at Regionals go on to compete in the Opening Round Regional Championships, and teams that place are sent to the national level.

“ORRCs was exciting. It was the first time we’d gone in a while,” Ness said, recalling her first year on Mock Trial when the team qualified. That year, the hypothetical case was grim; it involved two children who had found a parent’s gun and played Russian Roulette. The team had the option to try a child for homicide or to go after the parent for neglect. 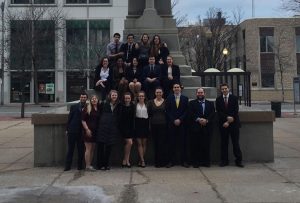 The tricky part of Mock Trial is that the team must prepare to act as both the prosecution and defense. In order to do well at tournaments, they must argue each side during different rounds of competition.

Ness prefers to take roles as an attorney, saying she has no talent for the acting that playing a witness requires. She competed on her high school’s Mock Trial team and still goes back during college breaks to coach and judge. Her glowing report of her high school experiences were what convinced Mock Trial secretary Mallory Nordin to join the UWM team.

“It sounded so cool, and I knew that was what I wanted to do,” Nordin said. Hailing from a family of attorneys, Nordin, an Economics major, finds tax law and public policy particularly fascinating. However, Mock Trial wasn’t the amazing experience she thought it would be at first.

“After my first year, I honestly hated it,” Nordin admitted with a laugh. “You have to go up in front of people. You don’t have a script with you. I felt like I was so bad at it. One of the reasons I kept with it is because I knew it would make me better.”

And therein lies the value of Mock Trial. In addition to helping members find camaraderie – Ness recounted stories of the shenanigans she and her teammates cooked up during their competitions – the club builds skills that both Ness and Nordin say will help them beyond college.

“Me, personally, it’s helped my leadership skills. It helps with public speaking, critical thinking, and thinking on your feet,” Ness said. “It helps with being persuasive, crafting an argument, commitment and dedication.”

And, if you’re planning on law school like Nordin is, Mock Trial gives you an excellent preview of what to expect. That’s what current students hear time after time from graduates who have pursued their law degree.

“[One student] said she’s already got a huge leg up on people just from knowing the rules of evidence,” Nordin said.

And beyond that, it’s just fun.

“It’s a time commitment, but it’s very rewarding,” Nordin said. “I think it has something for everyone. It’s a fun time and we have a great group of people. I say, go for it.”