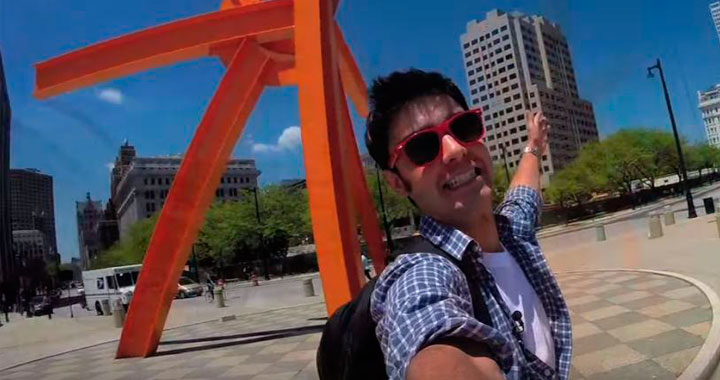 Mike Sportiello is a busy guy. A third-year student at UWM with a double major in Chemistry and Philosophy, Sportiello is also the Content Director for TEDxUWMilwaukee and was just elected to his position as the Student Association President. He has some big ideas about the changes he’d like to see for students at UWM, and what it means to be a voice for higher education.

What drew you to UWM?

I choose UWM for the vibrant research opportunities we have, especially for undergraduates. It was really easy; the second week of school, I just asked a professor if I could work in his lab and he said yes. (Associate Professor of Chemistry and Biochemistry) Alan Schwabacher and I have been friends ever since. It’s been quite the experience.

What is the Student Association, and why did you run for president?

The Student Association is the student government here. We’re here to enrich the lives of students through advocacy, representation, and the funding of student activities. We have a lot of really amazing projects going on. We’re working on developing a co-curricular transcript so we can incentivize students to get more involved in campus, so when future employers look at your transcript, they’re not just seeing Bio 101 but they’re seeing your true involvement from an offi cially-recognized university standpoint. We’re doing a lot of work with expanding internship and co-op opportunities. We also have a big part in the up-and-coming sexual assault prevention push that our campus is going to make. We’re hoping to start a pilot within the next year for some bystander intervention training within the residence halls.

(I decided to run for president because) we have a lot of student leaders on campus, but they’re really disparate and disconnected. I think one of the things we could benefi t from is enhancing the student experience by realizing that we’re all leaders, not only of our individual organizations and friend groups, but really for the university and the city as a whole.

I also love interacting with a million different people every day and it’s fun getting to know everyone.

As president, you’ve become a voice for other students through open letters and editorials throughout Wisconsin. What made you take on the role?

This is, as everybody here knows, an interesting time for UWM for a number of reasons, one of them being the recent budget announcements. In a very interesting way, it started a dialogue nationally for a lot of different people about the way higher education works. … Students are oftentimes left out of the conversation. I was really happy to step in to lend the voice that often is unheard at a time when it is asked for and wanted.

Can you talk about your experience with TEDxUWMilwaukee?

The idea is that (speakers) have an idea worth sharing. We bring speakers to campus (to deliver TED talks). Last year, we had people came all the way from Austin, Texas; to Iowa; to four streets away. This year we’ll have just as wide and diverse a crew. This is really valuable not only for the students but also the community. When we have impactful ideas being spread, everybody benefits – especially when they come to such an interesting city with a host of problems but also a host of hard-working, innovative people.

I had the privilege of working as the content director so I got to work with the speakers and coach them throughout the summer both this year and last year to get their talks ready and prepare them.

Do you sleep, ever?

And you’re busy with academics as well. What got you interested in chemistry research and why did you approach Dr. Schwabacher?

This is where it gets real nerdy. Get ready.

There’s a man by the name of Carl Zimmer. He works for National Geographic and he wrote a book called Microcosm about my favorite organism, the E. coli. He talks about the evolutionary history and all the cool things E. coli can do that no one ever thought they could or that no one would ever think they would. One of the really interesting things, in my opinion, is the way antibiotic resistance works within E. coli and a host of other organisms. Antibiotic resistance is something that has come to the forefront but will come even more to the forefront in the next decade as we as a society continue to prescribe antibiotics in the way that we do, in a way that is not good for the longevity of human kind.

I was really interested in chemistry research, and somebody told me (Dr. Schwabacher) was good about working withundergrads. It was weird at fi rst because the grad students were like, ’He’s never taken organic chemistry. He’s a second-week freshman. He’s probably going to kill himself. Let’s not give him anything too explosive.’

I joke. But within a few weeks, they realized that I was, just like a number of other undergraduate students, passionate about conducting research here. When we put in the hours, we can really participate and add to the value of the research that’s going on.

What’s next after graduation?

I’m pursuing my MD. I’m interested in doing Doctors Without Borders, I think. Something graduate or medical is the plan right now.

For students with questions about the Student Association or getting involved on campus, contact Sportiello at sportie3@uwm.edu.