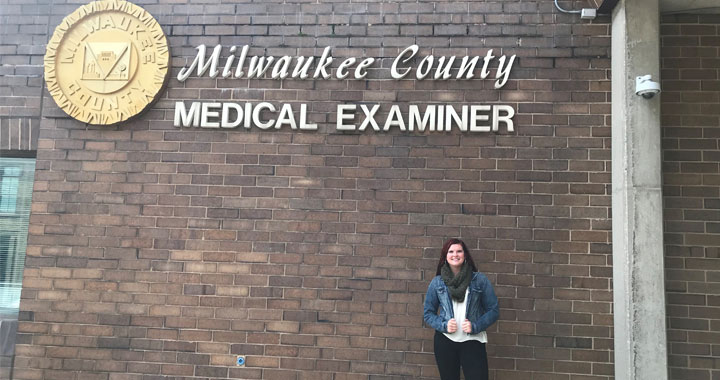 On the first day of her internship, Sami Jo Meyers saw a dead body.

“I walked in my first Monday at 8 a.m., and they said, ‘Hi. We have a suicide. Let’s go,’” Meyers recalled. “The police asked me to retrieve a bullet casing from a puddle of congealed blood and I said, ‘OK!’ I strapped my gloves on and went.”

Meyers, a Biological Sciences major working towards her Forensic Science certificate, is in the middle of an internship at the Milwaukee County Medical Examiner’s Office. Two days a week, she assists the county’s criminal death investigators and medical examiners in investigating incidents of death – whether by suicide or homicide, in natural or suspicious circumstances.

It’s the perfect internship for Meyers, who has been interested in science and crime ever since she received her first chemistry set as a child. She chose UWM for the Forensic Science program, and was delighted to learn that the university partners with the Wisconsin State Crime lab and the Milwaukee County ME’s Office to offer three internships each year. Meyers applied and was accepted.

“I did not expect to be so involved in the processes that go on at the office,” she said. “We work with the criminal death investigators themselves, who go out on the scene; the medical examiners and assistant medical examiners who do the autopsies of the bodies downstairs; and the toxicology unit, which is super-intriguing to me. They handle all the samples that are collected during the autopsies.”

In addition to retrieving bullet casings, Meyers has observed autopsies, taken blood and vitreous humor samples from bodies, and read the Jeffrey Dahmer case files stored in the ME’s Office.

“I feel useful and important. I’m not just observing or being a nuisance,” Meyers said. “I’ve learned that death is not as scary as I thought it was. … I look at it more as, I want to get justice for this person because of how they died, or I want to give closure to a family. I’m coming away with a lot of life lessons.”

And, she added, UWM has helped prepare her to learn them. “I think UWM and the Forensic Science program have really changed my life. It’s been a dream that I’ve always wanted, and now it’s attainable. You don’t get this internship opportunity at a lot of other schools,” Meyers said.