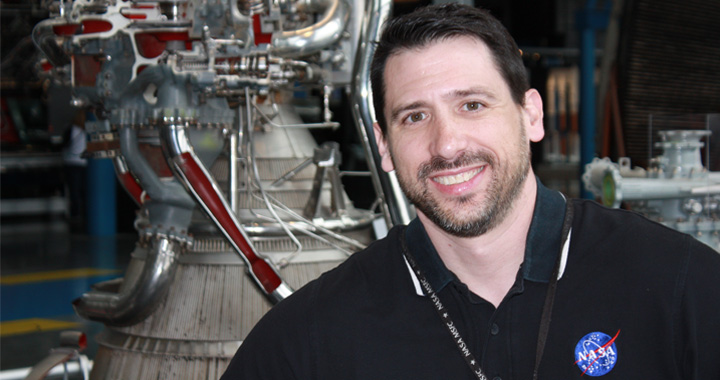 When he was younger, Jim Stott wanted to be an astronaut when he grew up. He hasn’t made it into space (yet), but he’s pretty darn close.

Stott is the Chief Safety and Mission Assurance Officer at NASA’s Marshall Space Flight Center in Hunstville, Ala. At its core, his job is to ensure that the people and equipment NASA sends into space depart from and return to Earth safely.

“My responsibility is having reliability, quality, and safety,” Stott said. “Reliability meaning making sure we have the best parts, watching out for counterfeit vendors. … Quality is making sure we have all the right quality processes in place – quality control, quality assurance. It’s making sure everything goes smoothly in terms of manufacturing. Safety – that’s system redundancy, making sure that we have redundant systems so it can tolerate single faults.”

Ensuring those three things requires several degrees and a list of credentials.
Stott began his education at UWM. It was close to his hometown of Brookfield,
and best of all, it had a Physics and Applied Mathematics major. Stott
graduated in 1997 with his Bachelor of Science, traveled and married, and then
returned to UWM to earn a Master’s degree in Mathematics in 2000.

The next stop was Alabama. Stott joined Hernandez Engineering, which at the
time was a subcontractor for NASA. Hernandez paid for Stott’s second Master’s in Electrical Engineering from the University of Alabama-Huntsville, which he used to work for the Department of Defense. He wasn’t planning to go for a PhD, but with the promise from his professors that it would be “easy” (it wasn’t, Stott said with a laugh), he earned a doctorate in Electrical Engineering.

From there, it was on to NASA. Stott joined when the Bush Administration was pushing the Constellation program, designed to replace the space shuttle.

“The Obama administration canceled that. They really wanted to focus on the commercial stuff,” Stott said. “I’ve got a lot of colleagues that work with Space X or Boeing and other private space companies. Also, we were tasked to design a heavy lift vehicle that would allow us the capability to go to Mars and the moon. That’s currently ongoing.”

At least, it is for now. NASA answers to the President, and the new administration may have different objectives for Stott and his fellow engineers.

“The programs that we have span administrations,” he said. “It lasts a minimum of 10 years to take something from design to building it. There’s always a threat, when there’s a new administration coming in, that they will cancel the program. … It’s very frustrating. I think the folks at NASA who are wise enough to know this stuff try to get the hardware built. We have a lot of hardware built, so hopefully [we can say], we’re almost done! Just let us get this done.”

Stott would especially like to see the heavy lift vehicle be completed because he’d like to see the United States visit the moon again. Not only does space travel increase the country’s international prestige, but it allows scientists to do research that can only be conducted in zero-gravity. Stott points to medicines that can be developed without the hindrance of gravity, or the presence of rare chemicals, like Helium-3, that can be harvested or studied in space.

“I think it’s a good thing to go out and discover new stuff to benefit humanity,” he said. “I think we need to do it in a way that is self-sustaining, and hopefully it will teach us a lot about how to be self-sustainable here.”

Even if the Trump administration has other goals in mind, Stott won’t give up on his hopes for discovery, or his dream of being an astronaut. In fact, that’s his advice for anyone looking to break into the aerospace field.

“Never give up. John Glenn was 77 when he went up for the last time. I guess he was the oldest guy in space. I’m not going to give up,” Stott said. “And study science and math, and all the STEM subjects. Just follow your interests and keep that objective in sight. Don’t give up and just enjoy the ride.”