L&S / All News / Featured Stories / Korean to Menominee: Grad hopes to save his language 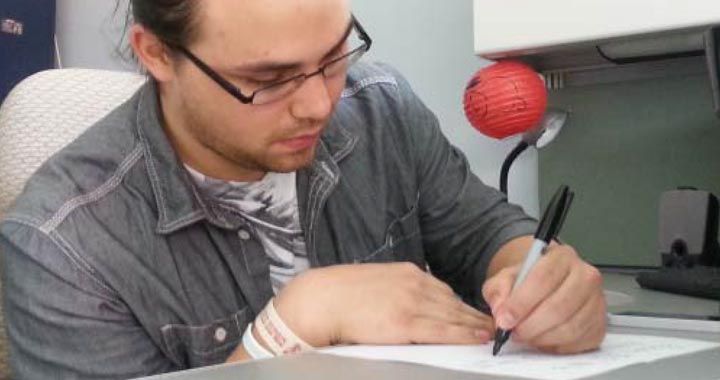 Corey Schaeffer wants to revitalize his people’s language with another one entirely.

Schaeffer, who graduated from UWM earlier this month with a major in Linguistics and a minor in Japanese, is a member of the Menominee Indian tribe. His life’s goal is to revitalize the Menominee language, which he estimates is fl uently spoken by less than 100 people of the Menominee nation’s 8,700 members. To do that, he hopes to help his people adopt a different alphabet – Korean.

“(In Korean, a character) stands for a certain sound,” Schaeffer explained. “You can put together an innumerable amount of sounds, and people can still read it.”

Schaeffer’s grandparents left the Menominee reservation before he was born, and Schaeffer was raised in Milwaukee. He attended Indian Community School of Milwaukee through grade school and learned Menominee vocabulary in his studies. Like most tribe members, however, English was his fi rst language and that could make learning Menominee a bit diffi cult. Menominee does not have its own alphabet, so Schaeffer had to learn his native words written with English letters.

“The way that you pronounce the words feels awkward. It takes a mental adjustment to read Menominee English characters and think, ‘Oh wait, that sound isn’t the same sound as it is in English, but it’s the same character,’” Schaeffer explained.

Instead, Schaeffer wants to push for his people to use the Korean orthography, where virtually any word in any language can be spelled out by using the specifi c characters that correspond to the sounds of the word. He was inspired after reading about an Indonesian tribe that was considering adopting the Korean orthography to preserve their own oral language. That same article prompted him to begin learning Korean in addition to his studies in Japanese.

In fact, much of Schaeffer’s education at UWM can be traced to his desire to preserve his people’s language. He initially began taking Japanese to fulfi ll a language requirement, but found himself admiring the culture and its implications for the Menominee.

“I’d always really enjoyed that to the outside, Japan is this very traditional, very old society, yet is making new technology. It would be really cool if we could fi gure out how to do that,” Schaeffer said. “Our people, and Native Americans in general, want to fi nd a balance between doing what needs to be done to be a successful economy and people, but also keep all of our traditions.”

Using a new alphabet to teach an old language is just such a balance, and Schaeffer is encouraged by the small experiments he did while he was studying abroad in Korea earlier in his UWM career.

“When I had a firmer grasp on writing the language, I started to write Menominee with Korean orthography. When I went to study abroad in Korea, I asked some Korean people to read these words that were written in Korean orthography, but I didn’t tell them how to pronounce it. When they saw it, they thought it was Korean,” Schaeffer said. “When they said what the word was, they didn’t try to pronounce it any differently … and their pronunciation was really close to what we want for the language. I found that so fascinating.”

He knows there are drawbacks and challenges to his plan – many people Schaeffer has talked to expressed doubts about learning a new orthography or pushed back against using a different culture’s alphabet to read their own language. Teaching a younger generation would probably be easier than convincing older generations to buy into it too, he added.

Even so, Schaeffer thinks the benefi ts outweigh the drawbacks, especially when he thinks about cultural identity.

“We really struggle as native people in general to fi nd individualism from American society in regards to the fact that we are a different people, just like anybody from South America or Europe or Asia,” Schaeffer said. “If you saw (the language) in some really different orthography, you’d be like, ‘These are defi nitely different people.’ I feel like we would feel a sense of pride from that.”

Schaeffer’s goal is still a ways off. In the meantime, he’s applying for internships to teach English in Korea. He hopes an internship will help him learn more about teaching languages to others.