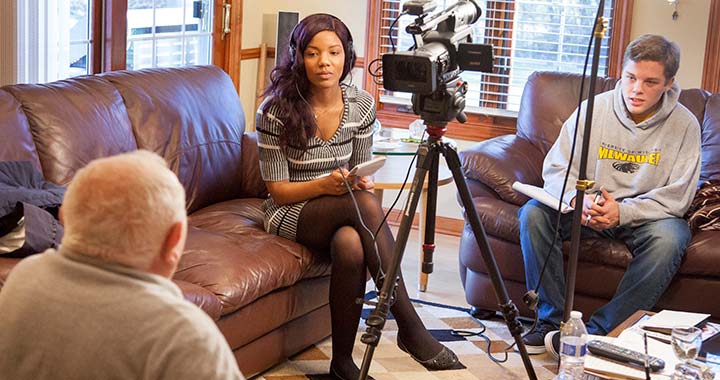 The beauty in Rae David’s home is a reminder of an ugly past, and the Holocaust survivor responds to compliments with unsettling frankness.

“You walk in to her house, and it’s gorgeous,” Journalism, Advertising, and Media Studies major Dylan Deprey said, recalling his first meeting with David. “I said, ‘Wow this is beautiful.’ And she said, ‘It’s paid with blood money.’”

David, 87, was imprisoned in the Vilna Ghetto in what is now Lithuania during World War II and was later liberated from the Bergen-Belsen concentration camp. Deprey recorded her often-painful memories for his Advanced Integrated Reporting Class in Journalism, Advertising, and Media Studies (JAMS). Students in the class hone their reporting skills by conducting in-depth interviews and completing print and multi-media projects telling their subjects’ stories.

The class made news last spring when students helped find missing pictures of Wisconsin soldiers killed in Vietnam for a memorial in Washington. This fall, JAMS senior lecturer Jessica McBride asked her students to work with Holocaust survivors in Milwaukee.

“I wanted to find another project that is unifying and has meaning to it, and that contributes to the community in a meaningful way,” McBride said. “I think it’s a good way for them to use their journalistic skills on something that is really rich, really interesting, and really matters. I wanted them to take it to the next level, because this is a great group of students, and they are so skilled at this point.”

The Nathan and Esther Pelz Holocaust Education Resource Center put McBride in touch with local survivors. She paired students according to strengths – Deprey is a writer, and his partner Tyler Nelson feels more at home with video production. Together, they made a list of talking points and divided up duties. Nelson asked David about her happier childhood memories, and then Deprey gently directed her to talk about difficult subjects like her time in the ghetto and camp.

“I knew it would be hard for her to talk. … She said it was like a living hell,” Deprey said. “She described starvation and how they would try to get scraps of food where the Nazis would eat, and the Nazis would pour ash all over the garbage so they couldn’t eat it. She said she found three potatoes and she hid them in her scarf. An SS woman grabbed her by the throat, and the potatoes fell out and she was beaten so badly.”

David was later paid reparations by Germany for the atrocities she endured.

Hearing survivors’ stories was emotional, JAMS major Mary Jo Contino said. She interviewed Howard Melton, a Lithuanian Jewish man who survived the Dachau concentration camp in Germany. He described laboring in a work camp in Latvia, his family dying at the Auschwitz concentration camp, and a forced march from Dachau to avoid American troops. Anyone who fell during the march was killed. Melton weighed just 70 pounds when he was liberated.

“You hear all of these stories in school when you are younger, when you learn about the Holocaust, but it doesn’t really resonate as much until you hear it firsthand. It was powerful,” Contino said. “He said that he was very comfortable telling his story – all of the dirtiest, grossest parts of it. He guided me more than I guided him, I would say.”

Many students were struck by some of the survivors’ ability to live without bitterness, but survivor Nate Taffel, interviewed by JAMS majors Amanda Porter and Daniel Zielinski, said he couldn’t keep living with hatred. 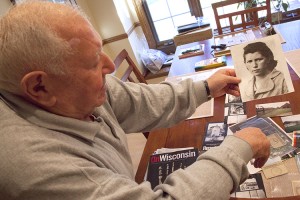 Holocaust survivor Nate Taffel holds a photograph of his youngest sister, Faiga, who drowned in a river in Poland, during an interview with UWM Journalism, Advertising, and Media Studies students.

“Today you see on television how much people are killed for religion’s sake in the world. I hope to live long enough to see that there’s peace on earth, and love. It’s so easily said, … but you’ve got to show the love within,” Taffel said. “We are all equal, no matter what religion. We all have the right to exist.”

McBride knew her students would benefit from talking with survivors, but she also wanted to ensure that stories like David’s, Taffel’s, and Melton’s were not lost.

“It’s really one of the last times to tell their stories, and these are people the Nazis wanted to silence. They didn’t want these people to grow into old age and get a chance to tell their story,” McBride said. “They say journalism is a rough draft of history, but this is literally history.”

The students’ articles are available online at http://bit.ly/1Pjn0AD, and the completed projects were also be given to the Nathan and Esther Pelz Holocaust Education Resource Center.