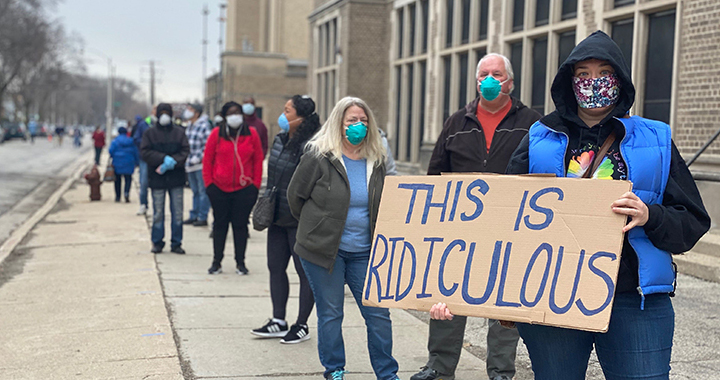 When Patricia McKnight went to vote on Tuesday and snapped a picture of the long line and one voter’s sign of frustration at the polling station, she didn’t know how much the image would resonate with people across the country.

McKnight, a senior at UWM majoring in English and Journalism, Advertising and Media Studies (JAMS), recently started an internship at the Milwaukee Journal Sentinel. When she went to Washington High School to vote, she asked her supervisors at the Journal Sentinel if they wanted a picture, and they said yes.

McKnight stopped when she saw a sign that read “This is ridiculous.” She talked to the woman, Jennifer Taff, who had requested an absentee ballot but never received it. Instead, Taff had to vote in person amid the coronavirus outbreak, a risk she didn’t want to take since her father has a lung disease, McKnight said.

The photo was used in a Journal Sentinel story about Wisconsin’s voting scene on Tuesday, and it quickly went viral.

Don Moynihan, a professor at Georgetown University, called it “an era-defining image,” a phrase that has stuck with the picture. The photo was used by news outlets across the country, including MSNBC, NBC, CNN, USA Today and Slate, among others. The Journal Sentinel featured it on its home page all afternoon Tuesday and much of the day Wednesday, and put it on the front page of Wednesday’s print edition.

The photo was being shared thousands of times on Twitter, but McKnight didn’t have an account. She rectified that Tuesday afternoon, and 24 hours later @Pmcknightnews had more than 7,000 Twitter followers. On Wednesday evening, she talked about the experience.

How did the picture come about?

I was just going on my way to vote – that’s it. It wasn’t an assignment or anything. I saw the very, very long line, and I started walking towards the back of the line. I saw the woman standing there with the sign, and I asked her a couple of questions about the sign because it was like, “Yes, it is ridiculous.”

How long did it take you to vote?

About an hour and a half. I mean, when you go from 180 polling stations down to just five, it will take that long.

What is it about this picture that you think has caught so much attention?

Our JAMS professors tell us to make sure the lighting is right, to make sure the person is centered when you’re using the “rule of thirds,” so I did all of that and I thought “oh, this is a good picture,” but I didn’t know it was the picture. But just the message – you see every single person wearing a mask, some have gloves on, and they’re standing in line (in a) kind of life or death situation because they want to vote and they want to make a change in their community. It’s the photo itself, but it’s also the message behind the photo.

Why this woman specifically?

There were hundreds and hundreds of people there that I saw and she was the only one with a sign. I wanted to know the story behind it.

You’ve had a lot of people interact with this photo. Has there been anyone that has really stood out to you?

Rachel Maddow really stood out because I really appreciate her saying my name. My photo was on ABC news, and they didn’t credit it – and that’s fine because I know they asked permission from the Journal Sentinel. But her giving a name to the photo, I really did appreciate it… It really matters having the recognition and having your name spoken out into the world.

How do you see this affecting you going forward?

A lot of people have been adding me on LinkedIn, so that’s exciting that professionals and other journalists are paying attention to me. Hopefully, they’ll read some of my stories, because I’m a mainly a writer. I don’t want my experience to be defined by this one photo.

Has this led to anything that you would want to pursue after graduation?

I’ve always wanted to do photography, but I’ve never had the funds for a camera. I’m glad that I could use a phone and get the photo that I wanted. I’ve always been big on (taking) my own photos for my stories… I have a pretty good eye for photos with everything my professors have told me in my journalism classes. I take everything they say pretty seriously.

Do you have any advice for future journalists or anyone looking to get into the industry?

Be proactive about what you want to do.

By Amanda Niebauer. Originally posted in the UWM Report.