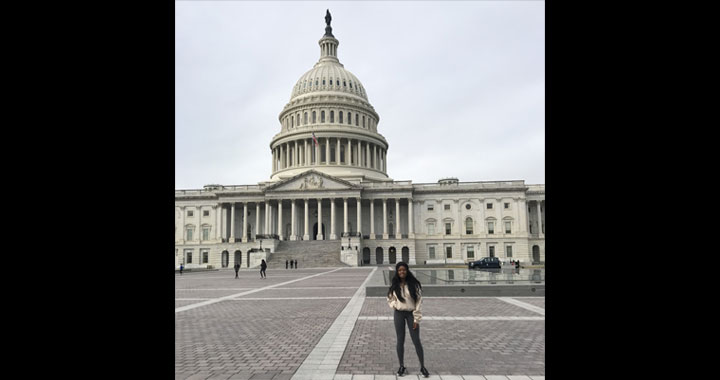 Cynthia Maduka was initially hesitant to travel to Washington, D.C. She didn’t know anyone in the city and she was nervous (and excited) about the idea of starting over.

Now she can’t imagine her future anywhere else but in the nation’s capital.

Maduka, a journalism, advertising, and media studies major, spent the past semester as an intern in the Washington, D.C. Mayor’s Office of Veterans’ Affairs. The office helps veterans access social and financial services, from getting community resources to finding transitional housing to helping them resolve unpaid parking tickets.

For Maduka, who is also working toward a minor in political science and a certificate in Cultures and Communities, it was a dream come true.

“By far the most rewarding thing was seeing the outcomes for the Mayor’s Office of Veteran’s Affairs,” she said. “Seeing a veteran getting their license because they finally got a large ticket paid off, or someone who was looking for transitional housing, being able to get them or helping them navigate those resources – helping them establish themselves back into society was the best part of my internship.”

She arrived at that internship through The Washington Center, an organization that helps connect college students around the world with internships in Washington, D.C.

Maduka even earned two scholarships – one from UWM and one from The Washington Center – to help defray the cost of the program and her living expenses in the city.

She’s the first student from UWM in 5 years to go through the program.

“I told The Washington Center that I was interested in political advocacy and things of that nature. They pair you up with various internships,” Maduka recalled. “I settled on the Mayor’s Office of Veterans’ Affairs in Washington, D.C. because it was more hands-on. I was able to work face-to-face with these veterans.”

Each work day, she would take the Metro to the Judiciary Square Building. There, Maduka settled into her office – “I did have my own office. It was pretty sweet,” she said with a laugh – and began her job duties, which ranged from working out payment plans with veterans to pay for tickets of $1,000 or more, to helping them get a year’s free membership to the Capital Bike Share program.

There, she helped African immigrants access resources like housing centers, language access opportunities, and pro bono legal services. She also helped to develop a resource guide that focused on pathways to homeownership.

The work held special meaning; Maduka is an immigrant herself. She and her family moved to the United States from Lagos, Nigeria, when Maduka was 4 years old. She remembers how difficult it was to assimilate to a new culture, and her coworkers at the Mayor’s Office of African Affairs all had similar stories.

“Everyone from my director to my supervisor was an immigrant or children of immigrants. It was a wonderful, at-home feeling. You can relate,” Maduka said. “To be able to help people who literally came to the United States not even two days ago, and they’re trying to find ways to learn English and get their kids into school and find housing, that was pretty rewarding for me.”

In fact, she’s considering a career in immigration advocacy once she graduates from college.

For now, though, Maduka is back in Wisconsin, where she’s spending the summer working at a prestigious internship for the Harley Davidson Company. She has one more year to go before she graduates from UWM in 2020.

When she does, she wants to head right back to Washington, D.C.

“I learned that life is bigger than this small bubble. It’s good to take risks sometimes,” she said. “After interning in D.C., I know I want to go back there after college and establish a career there.”