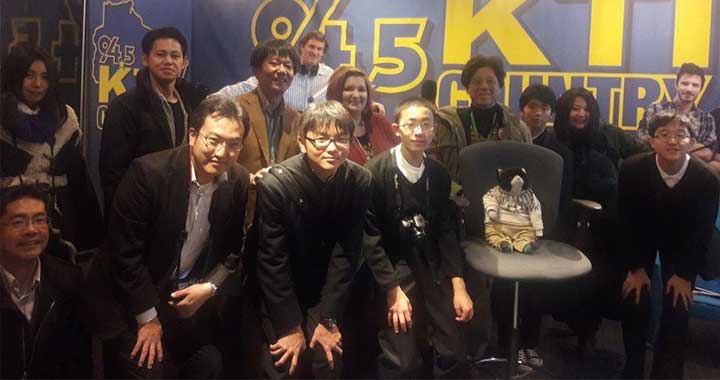 The annual Milwaukee Trainfest is the largest show of its kind in the world. Each November, collectors from across the globe gather to show, share, and learn about model trains.

But, when you bring together people from around the world, you can run into language barriers. When a team of Japanese high school students from Hiroshima Johoku High School won a national model train layout competition to attend the event, the Japanese consulate turned to UWM.

First-year Japanese student Britt Fell jumped at the chance to be an interpreter for the Japanese team.

“It sounded like something that would look good on my résumé, and I always wanted to try my hand at it,” she said.

Trainfest took place Nov. 11 and 12, so for two days, Fell accompanied the team for media appearances and presentations. She and the students appeared on Channel TMJ4’s morning show, Morning Blend, and she also translated during a subsequent tour of TMJ4’s television and radio stations on Friday.

On Saturday, she translated their presentation of their model train. Translating was both exhilarating and nerve-wracking, Fell said.

“I had no idea what they were going to say,” she explained. “I felt like I floundered a bit translating the news interviewers’ questions from English to Japanese. The other way, Japanese to English, I thought was much easier because that’s what I’m used to.”

Fell previously taught in the JET program, an opportunity that allowed her to live and work as an English teacher in Japan. Several of Fell’s classmates also lent their translation talents; Anthony Turtenwald, Eric Mohr, and Edward Beihan also interpreted during the event.

“Opportunities like this are valuable career building experiences for our students,” said Japanese program coordinator Aragorn Quinn. “This is the second year in a row we have been able to provide these kinds of services for events in the community. As a program, it is rewarding to have our students fulfilling the university mission of community engagement and also putting their language skills to real and tangible use.”

For Fell, the chance to translate provided a glimpse of a possible future career.

“I’d like to go into translation, interpretation, and localization,” she said. “It was sad to see Trainfest end, even if it was a bit nerve-wracking. I enjoyed it and I would love to translate again.”

Caffeine fix may come with a memory boost