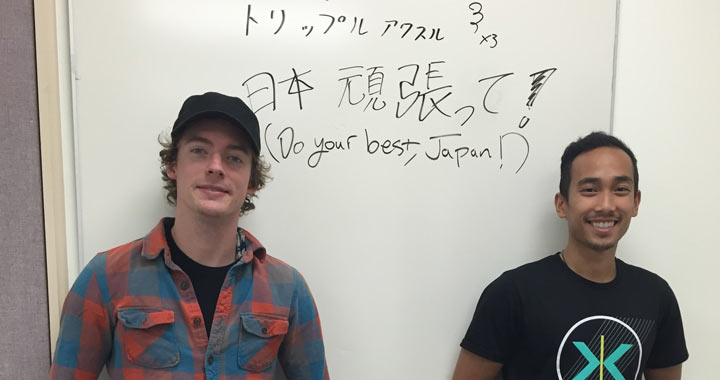 Praditya Hargianto and Peter Grzywacz, both Japanese majors, were busy during the 2015 Skate America competition at UW-Milwaukee Panther Arena in late October: They were serving as interpreters for the tournament’s Japanese competitors. Covered by national and international press and featuring Olympic- and world-level athletes, Skate America is the first of six stops on the International Skating Union Grand Prix of Figure Skating Series.

To prepare for the event, Hargianto and Grzywacz watched past interviews of the athletes they were interpreting for to pick up each skater’s personal style and commonly-used phrases during interviews. Hargianto and Grywacz, unfamiliar with figure skating’s technical jargon, also had to learn skating terms that judges would use to describe the performance.

“It makes me respect interpreters a lot more,” Peter Grzywacz said. “You need base knowledge, but you also really need to act on your feet.”

During media interviews with athletes, Grzywacz and Hargianto had to interpret questions from reporters within 10 seconds and translate the answers back. Hargianto translated for three skaters in the ladies division and Grzywacz translated for the male skaters.

“It’s one of the scariest things you can do as an undergrad,” Hargianto said of interpreting. “It’s a big responsibility.”

Each student volunteered their time and was rewarded with close seats to watch the competition. Both Grzywacz and Hargianto agreed that watching figure skating on TV does not do the sport justice.

“It made me a fan. I used to think (figure skating) wasn’t that cool of a sport, but it’s really intense,” said Gryzwacz.

Italian professor’s book takes on the Mafia through fiction