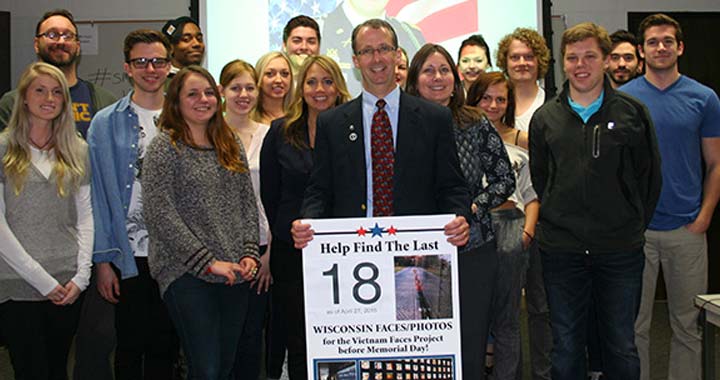 When the grainy, black and white photo from a 1966 obituary popped up on her computer screen, UWM junior Amanda Porter reached out and touched it. “Well, there you are at last, Nathaniel Merriweather.”

Porter is one of 27 UWM Journalism, Advertising, and Media Studies (JAMS) students helping locate photos and tell the stories of Wisconsin soldiers killed in the Vietnam War.

It’s a project of local significance and national relevance. UWM educates more military veterans than any college or university in Wisconsin. The Faces Never Forgotten program is part of a national effort to find approximately 18,000 missing photos for a digital Wall of Faces planned for the new Vietnam Veterans Education Center at The Wall in Washington, D.C. Organizers hope that photos will be found to accompany all 58,300 names listed on the Vietnam Veterans Memorial Wall.

(The photos found so far are online at http://www.vvmf.org/Wall-of-Faces.)

“I thought it was an excellent way to teach basic research and storytelling skills, as well as the role the media can play in communities,” says McBride. “I want students to work on stories that matter. It’s moving how they have embraced this cause.”

Johnson has two very personal reasons for getting involved. The Education Center at The Wall also will project photos of the nearly 8,000 service members killed in action since Sept. 11. One of those soldiers is U.S. Army 1st Lt. David Johnson, who was killed in Afghanistan in January 2012. Andrew Johnson says Vietnam veterans, like those in the Patriot Guard, have been supportive of his family as they mourned David’s death. Patriot Guard members helped lead his son’s funeral procession and accompanied Lt. Johnson’s casket up until his burial at Arlington National Cemetery.

“Photos are so important in making a person ‘real,’” Johnson explains, adding that there are few photos of many of the soldiers who fought in the unpopular Vietnam War. Further compounding the problem is the 1973 fi re at the National Personnel Records center that destroyed approximately 16-18 million offi cial military personnel files.

When Johnson started the Wisconsin project a year ago, 400 Wisconsin soldiers killed in Vietnam had no photos on fi le. By the time UWM student journalists got involved in winter 2015, the list was down to 63. Each student took two, and McBride took the remaining seven. When Johnson visited the two classes in late April, the count was down to 18. (As of publication, the count is down to one.)

Finding photos and information about soldiers dead for 45 years or more proved challenging, so students pored over cemetery records, checked phone directories and yearbooks, looked through memorial sites, and tracked down surviving family and friends any way they could.

Some family members barely remembered a long-dead relative. For others, the pain was still fresh. McBride located soldier Michael Bohrman’s 95-year-old father in Delafi eld. He still hasn’t opened the box of his son’s belongings sent home from Vietnam, but he kept Michael’s candy-apple red Corvette. The 20-year-old was killed three days before the end of his tour.

After locating a photo of her first soldier, George Anthony Chapman, 19, in a John Marshall High School yearbook, Porter began looking for 23-year-old Sgt. Nathaniel Merriweather, killed in 1966. With hundreds of people with that last name in Milwaukee, she didn’t have much luck until she began searching cemetery records. She found his grave in Stanton, a small town in Tennessee. Cemetery and funeral records didn’t go back to 1966, but she talked to Stanton Mayor Allan Sterbinsky – a Racine native happy to reconnect with his home state.

With Sterbinsky’s help, Porter made contact with Larry Knapp, an army buddy of Merriweather’s, now living in suburban
Chicago, and Jim Ackerman in Stanton, who sent her a copy of Merriweather’s obituary from the Brownsville States-Graphic.

Both wrote her encouraging emails. Knapp and Merriweather had been close friends, and Knapp had posted about him on a veteran’s memorial site: “Luco and I cried when we read that you had been killed in this battle.”

“When we started this project, I thought about these Vietnam soldiers as old men, but they were my age, or my brother’s age,” says Porter. Touching that obituary photo of Nathaniel Merriweather on her computer screen, she says: “It gave me a warm feeling, but really sad. I’m grateful that they are going to be remembered and I was part of that.”