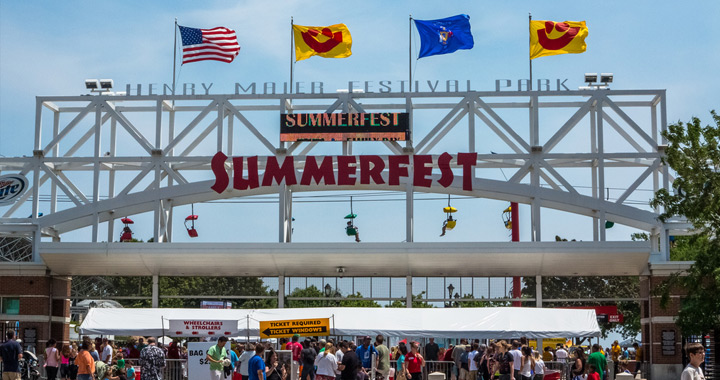 Summerfest is the Midwest’s largest music festival, bringing together hundreds of performers on 11 stages over two weeks at the end of June and beginning of July. Thousands pour into the Summerfest grounds just off of Lake Michigan near Milwaukee’s downtown. This year, while they watched the bands, Innovative Weather was watching the skies.

Innovative Weather operates under the umbrella of UWM’s Atmospheric Sciences program. Staffed by undergrad and graduate students, the organization provides customized forecasts for clients like We Energies and the Milwaukee Brewers. This summer, they added a new client – Milwaukee World Festival, Inc., the company that puts on Summerfest. Innovative Weather was hired by Rick Snow, the Director of Facility and Event Operations for Milwaukee World Festival.

“Rick Snow mentioned to me that he saw an article in the Journal Sentinel (about Innovative Weather). He saw it when it ran in December. He just held onto it,” said Innovative Weather Center Director Mike Westendorf. “The festival season runs June through September. He thought, when it gets a little bit closer, he’d like to try us out.”

“We did have a competitive bidding (process). Innovative came out on top particularly because of the local aspect,” Snow said. “They’re very energetic. They’re into weather. Being an outdoor festival venue, we need people who are into weather.”

That includes people like Timm Uhlmann and Austin Harris, graduate students in the Atmospheric Science program who work for Innovative Weather.

“They don’t like lightning, as you can imagine. People are outdoors, they’re at a festival. They don’t want lightning,” Uhlmann added. “They also want to know about rain in general, because nothing will clear out a crowd faster than a rainfall. And hail, of course, along the same lines.”

Wind can also affect the festival, especially vendors’ tents. Falling temperatures might mean a light crowd, and there’s always the lake effect to contend with.

This year’s festival was free of severe weather, though it did see some cooler temperatures, according to Harris and Uhlmann. Uhlmann in particular likes working with clients in Milwaukee; he enjoys knowing in real time whether or not he got the forecast right.

Westendorf likes working with Milwaukee clients because he values the community partnerships Innovative Weather has been building since its founding eight years ago. It’s especially gratifying when a well-known company like Milwaukee World Festival takes an interest.

“To get area Milwaukee (business) is great. That’s huge. It just solidifies we are Milwaukee or southeast Wisconsin,” Westendorf said. “It was a surprise to get the call out of the blue saying, we want to talk to you. It’s the kind of thing that, eight years in, you’ve been hoping happens for a long time. … Occasionally you have something like this that affirms that steady, constant, excellent work does get you noticed.”

Summerfest is over now, but there’s still plenty of work for Innovative Weather, said Snow. The Summerfest grounds play host to several other events, including most of the city’s ethnic festivals and even Petfest, celebrating the city’s four-legged friends. Innovative Weather will have to provide forecasts for all of those, and has already helped to guide Milwaukee World Festival through severe weather during Festa Italiana in mid-July. A massive thunderstorm rolled into town, but the young forecasters were on the job.

“It was forecasted to the letter. It was just perfect,” Snow said. “We’re still new in our relationship … (but) it’s working out very well for us.”