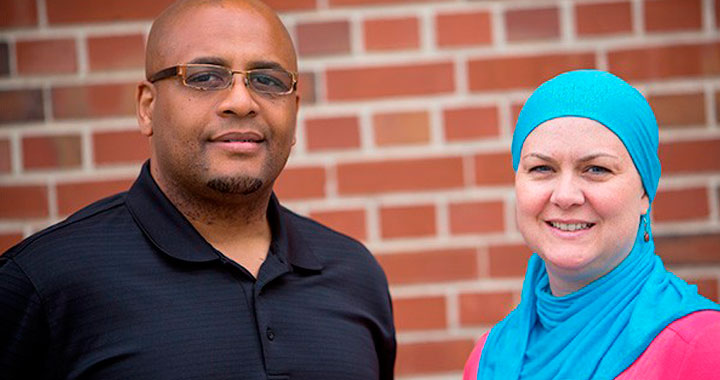 Violence involving young people in Milwaukee gets plenty of media attention. The good news – that people all over the city are working for positive change – doesn’t always get as much attention, said Robert Smith, associate vice chancellor for Global Inclusion & Engagement at UWM and Associate Professor of History.

Smith is one of many who are working quietly in partnership with city leaders and others to make policy changes and mentor young people of color.

For example, in collaboration with Larry Miller, vice president of the Milwaukee Board of School Directors, Smith helped write a “Black Lives Matter,” resolution, which Miller introduced and the board approved. The resolution committed Milwaukee Public Schools to renewed efforts to create safe places for dialog and support, and to making changes around policing, discipline and curriculum to strengthen the role of schools as centers for community support.

Smith also has been mentoring a group of young black men at Wauwatosa West High School, meeting with them to discuss their issues and concerns.

West’s principal, Frank Calarco, thanked UWM for the partnership in a letter to Chancellor Mark Mone:

“Simply put, this has been the best ‘intervention’ that I have been a part of in my 25 years of education. Although I used the term intervention, Dr. Smith uses a pro-active approach to help these young men realize how much pot ential they have.”

Smith is quick to point out that he is only one of many people working on these urgent issues. “There is a lot of great work being done across the city.”

That work involves people of all races and cultures. The school board resolution called for setting up an advisory council of community members, parents, educators and students to help review and create curriculum and policy related to issues raised by the Black Lives Matter movement.

And while the Black Lives Matter movement is used to frame the concerns, the issues that need to be addressed also involve Latino, Hmong, LGBT and other groups of young people, according to Smith and Miller.

“We framed the resolution around Black Lives Matter, but we see the connections with other long-standing issues affecting young people,” they wrote in the resolution. These issues include inequality, lack of opportunity, little recognition of unique cultures, discipline policies, and the need to reverse the “school-to-prison” pipeline that impacts so many.

Smith’s involvement at Wauwatosa West grew out of annual summits for young black men that UWM has held for the past three years.

Wauwatosa West teacher Rebecca Kirchman, who advises the school’s Black Student Union, brought a group of students to the 2013 UWM summit. After meeting Smith, she asked him if he’d be willing to mentor interested African-American male students at West. The program there is voluntary, and offers the students a safe, confi dential place to talk about everything from becoming a man to sexuality to integration to academics.

“It’s a really meaningful program that we would not have been able to do without his volunteer help,” Kirchman said.

Like many teens, the 20 students in the group have mostly chosen their role models from sports or entertainment fi gures. But working with Smith has helped expand their ideas of what their futures can be.

“You have expanded my mind and vision in amazing ways,” one wrote in a thank-you note.

Another wrote: “I want to be just like you. Thank you for being a role model.”