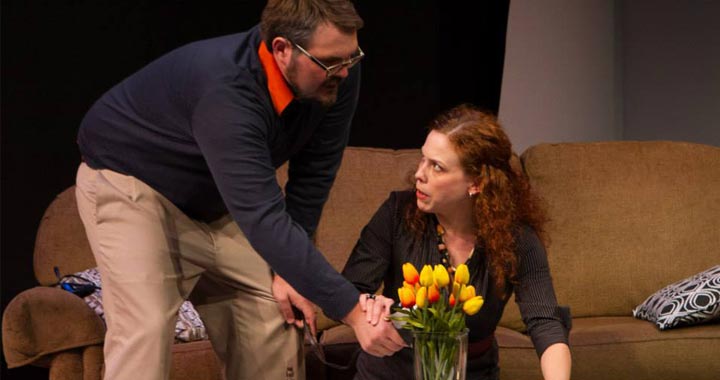 On stage, she’s been called Regan, Mary Kelly, Veronica, and many other names, but in real life, she’s Anna Figlesthaler – a teacher, actor, and UWM graduate.

Figlesthaler laughs as she relates her hectic schedule. Her job as a theater teacher for Rufus King International School in Milwaukee keeps her busy during the school year, but now that summer has started, Figlesthaler’s own acting career is in full swing. Last year, she and three friends founded the Umbrella Group, a theater production company that is beginning to flourish. This summer, the company is producing These Shining Lives, and Figlesthaler will perform.

It was a long road to her current profession. Figlesthaler grew up in Wauwatosa, Wisc.; studied theater at UW-Eau Claire; moved to Milwaukee; and quickly found that the life of a starving artist was not one she wanted for herself. She needed to make some changes.

“I broke down what it was about theater that I really loved and realized it was the script analysis. It was getting other people excited about what I was doing with an original play,” Figlesthaler said. “I realized that that is teaching. So, that’s when I first went to UWM.”

Figlesthaler got her teaching license in Secondary English Education, sure that no one would hire a person whose only expertise was theater. She was wrong – after a few setbacks, she was hired as a theater teacher at Rufus King, and so went back to UWM to get her teaching license for that area. It was there that she met Robin Mello, an associate professor of Theater Education in the Peck School of the Arts. Mello began steering Figlesthaler in the direction of the Masters in Liberal Studies in Letters & Science, a degree that emphasizes learning across disciplines.

“I totally dug the MLS program because it’s kind of a ‘build-your-own-program’. It is under this idea that we can better understand humanity through many lenses, not just one, not just English or Art or Theater or History or whatever,” Figlesthaler explained. “That worked really well for me, given the fact that I taught three different subjects.”

Earning her master’s degree while working full time was chaotic, but several professors stand out for Figlesthaler, including Martin Jack Rosenblum and Jeffrey Hayes. Both professors have passed away since Figlesthaler earned her degree in 2012. Hayes especially encouraged Figlesthaler in writing her thesis, a play surrounding the events of Wisconsin Gov. Scott Walker’s budget repair bill, which sparked protests from teachers across the state since the law ended collective bargaining.

After graduating, Figlesthaler embarked on more personal projects, including one fateful production of King Lear where she played Regan. She forged such close friendships with cast mates Libby Amato, Bo Johnson and Matt Wickey that the four decided to open Umbrella Group Theater. Figlesthaler often acts in her company’s productions and will appear in These Shining Lives, which tells the true story of the “Radium Girls” who were stricken with cancer as employees at the Radium Dial watch factory in Ottawa, Ill. Tickets for the show are available at umbrellagroupmilwaukee.com.

Playing women and supporting shows featuring their struggles, journeys, triumphs and personal growth is a cause near and dear to Figlesthaler’s feminist heart.

“There’s not equity among the sexes when it comes to the entertainment industry at all. I fi nd it important to promote these stories. I read a ton of plays for both school and my acting career, and there’s such an imbalance between male roles and female roles, even now, even with what’s coming out on Broadway. The male playwrights outnumber female playwrights immensely,” she said. “This is part of the draw to me for These Shining Lives – (because) it shows how these women connect and support each other and whatnot, and I think that’s really important.”

Umbrella Group Theater has started small, Figlesthaler said, but the company is beginning to gain attention.

“We’re only a year old. We’re moving toward non-profit status,” she said. “It’s not necessarily about the accolades, but it’s kind of nice when you get a nice review in the paper. It’s about storytelling. It’s about sharing these stories.”