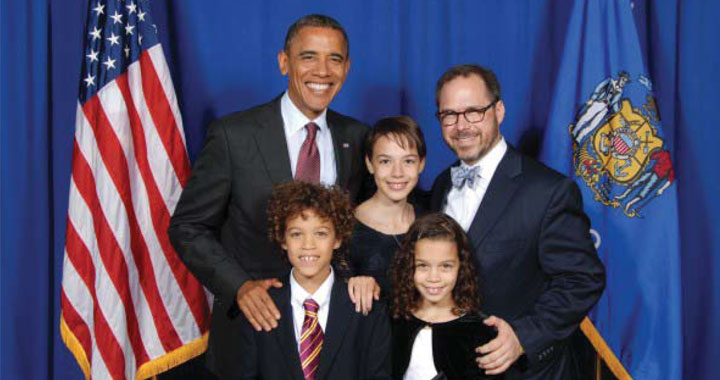 When President Barack Obama wanted a national Day of Service as part of his 2009 inauguration, when he needed community leaders to help shape the White House’s first Office of Social Innovation, when he was seeking change-makers for the White House Council for Community Solutions, he called Paul Schmitz (’94, BA Political Science).

Today, Schmitz keeps a foot on the ground in Washington, D.C., as the first innovator in residence at Georgetown University’s Beeck Center for Social Impact + Innovation. But the UWM graduate still lives within walking distance of the alma mater that profoundly shaped the writer and thought leader he is today.

In the early ’90s, community engagement was getting off the ground at UWM and commuter students like Schmitz were the majority of the student population.

He was president of College Dems and juggled political science courses with a telemarketing job. He was earning straight As for the first time in his life and fl exed the writing muscle that would land him guest-columnist roles in The Washington Post and power his first book, “Everyone Leads: Building Leadership from the Community Up” (2011).

He had just one problem with college life – he wasn’t giving back.

“I was a recovering addict and I was already involved in service through that, but I was looking for more,” says Schmitz. “I had this sense that was built into my DNA by then: Whenever you’re given the opportunity, you need to give back.”

Then he met someone.

“I met Vanessa Kirsch in ’92. She told me she was starting an organization, Public Allies, for young people who had a passion for making a difference (and turning) that passion into careers in nonprofit and public service.

By 1993, Schmitz was founding director of Public Allies Milwaukee, one of the fi rst city chapters of the national nonprofi t that recruits and trains young leaders for the nonprofi t sector. His closest colleague during those early years was a Princeton and Harvard Law graduate from Chicago. “It made me feel like a complete imbecile,” he now says, laughing. “I was 24 and didn’t even have my bachelor’s degree completed.”

Good thing that in addition to being talented and professional, Public Allies Chicago Director Michelle Obama was a gracious colleague.

Schmitz turned out to be a natural leader himself. He became Public Allies national CEO in 2000. When he stepped down in summer 2014, Allies alumni numbered 5,600 in 23 city chapters nationwide.

Through it all, family and career kept him based in Milwaukee, where he’s proud to see his alma mater firmly entrenched in the city’s nonprofi t community and many of his fellow alumni taking on diverse leadership positions across the city “People, UWM students, serving the community tend to stay in the community,” he says. “When they get involved with an issue or an organization, there’s a potential for sustainability with that.”

“At UWM, more students come from the community, and live in the community. Many universities that are doing student service, the students are coming from the outside – and typically far outside the economic class of the city they’re serving in,” explains Schmitz, who also holds a senior advisor position with the Collective Impact Forum.

“For Milwaukee and UWM, students aren’t coming in with some view of the community as something outside of them, but as something they are part of. That is why UWM is such a vital asset for our community.”