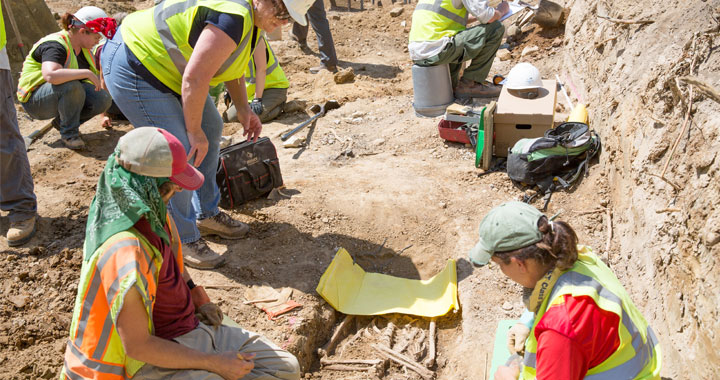 In the early 1800s, John Grunhagen emigrated from Germany to the United States, settled in Milwaukee and bought five acres of land in the city. In 1849, he began selling burial plots on his acreage in conjunction with a cemetery association. The area became known as Grunhagen’s Cemetery, a final resting places for the area’s German Lutherans.

But in 1871, the cemetery association defaulted on its mortgage and the City of Milwaukee, eager to develop the area, ordered the burial ground to close and its occupants to be moved. Houses, churches, and businesses sprang up. Grunhagen’s Cemetery faded from memory until all that remained were a few photos archived in the Milwaukee Public Library.

Roughly 144 years later, Patricia Richards, an Associate Scientist at UWM and Associate Director of the university’s Cultural Resource Management (UWMCRM) program, is wearing a neon construction vest and a white hard hat as she looks over a dusty lot on North 13th Street in early August. In an L-shaped pit before her, UWM graduate students and professional archaeologists are sitting in the dirt, carefully brushing grit away from skeletons half-embedded in the ground.

As it turns out, photos were not all that remained of Grunhagen’s Cemetery. In fact, at least 55 bodies remained, graves that weren’t removed when the city gave the order.

Richards is in charge of the cemetery’s excavation. She and the Cultural Resource Management program were hired by Guest House of Milwaukee, a homeless shelter just off of Highway 43. Guest House wanted to expand its building into the lot next door and asked CRM to be on hand when it broke ground to ensure that it didn’t disturb anything beneath the soil – like a graveyard.

“They were pretty sure that there wasn’t going to be anything here, because, as you can see, we’re standing in the basement of a house,” Richards says, pointing out the dimensions. “(But) we ran into burials in the wall, burials underneath here. They poured a cement foundation here over burials that were intact.”

UWM-CRM was founded in 1974 and has operated as a contractual arm of the Anthropology Department ever since. The program helps public and private agencies comply with the National Historic Preservation Act on the federal level and Wisconsin State Statute 4440 on the state level, which obligates state agencies to take into account the effect any building project might have on local resources.

UWM CRM was on hand in 2006 to excavate the Old Catholic Cemetery on 22nd Street in Milwaukee and in 2013 when Froedtert Hospital broke ground for a new building and found an unmarked cemetery below.

In fact, says Richards, there are about 70 of these “forgotten cemeteries” in Milwaukee County alone. Now it’s Grunhagen’s time to be remembered.

The archaeologists and graduate students are wielding shovels, sifting through dirt and gently uncovering old bones. Most of the burials were adults, but the crew found six juvenile graves in a separate section of the cemetery.

“What we aim to do is expose the remains in place and to do so without damaging them,” Richards says. “There are a variety of things that we learn about orientation related to burial program. … Did you cross the hands over the chest or by the side? Does the person have something in their hands? Can you tell if they were put in a coffi n that was actually made for them, or were they put in a coffin that was too big or too small?”

The coffins have all rotted away, but there are the occasional rusted coffi n nails in the dirt, adds Anthropology PhD candidate Marcus Schulenburg. He was an emergency hire by CRM for an excavation beneath a Lake Winnebago road in 2009 and has worked for the program since. On this day, he’s gently using wooden tools to chip away dirt from a femur. There’s a lot you can learn from bones, he says, gesturing to the ones laid out before him.

“As far as we know, it’s an adult. … We know they were young-ish, but (had) some dental problems. There’s a very large cavity. They would have had toothaches during their life,” he says. “This looks like a suspender clip that we’ve got, which is pretty neat to find. &hellp; They were buried with their arms crossed. It was a traditional Christian burial. The head is oriented to the west.”

UWM’s Anthropology lab is where all of these bones are destined, once they’re uncovered and photographed. There, students and professors will clean and analyze them.

The Historical Society could elect to rebury the bodies elsewhere, or the bones may stay permanently at UWM for curation in the Anthropology Lab.

Either way, Richards says, they’ll try to identify the remains as best they can. There are no cemetery records or surviving gravestones, so the process will be diffi cult. It all comes down to a sense of respect, she adds.

“The people who do this kind of work … don’t do it because they’re going to get rich or get famous. They do it because they have a sense of respect for, and need to honor, folks in cemeteries like this,” she says. “Each of these people was buried and loved by a family member. We really feel strongly that that’s what we’re trying to somehow honor (and) protect.”