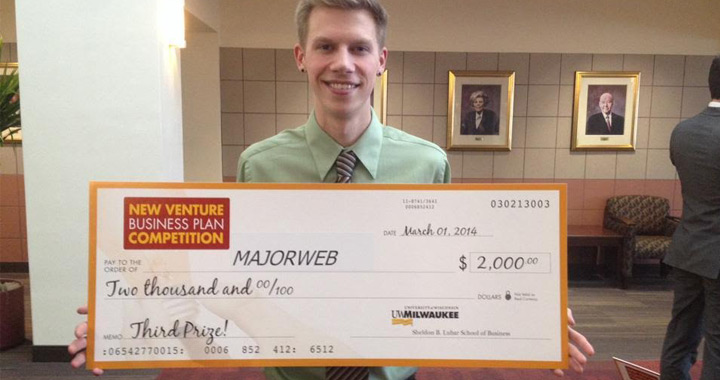 Given his interest in entrepreneurship and startup businesses, you might expect Kyle Forsberg to have been a natural fit in UWM’s Lubar School of Business – but he readily admits he would have been bored. Instead, Forsberg found himself flourishing in Letters & Science’s Global Studies program.

“(It) was interesting because it wasn’t one specific topic. It covered globalization, technology. I studied social media; I studied business. I studied marketing,” Forsberg said. “I found the interdisciplinary approach to it a lot more useful.”

Forsberg graduated from UWM in 2014, but it was his global studies education and his activities in school that helped shape his current career. In June of 2013, as part of his major requirements, he traveled to Argentina for an internship with Startup Buenos Aires, an organization aimed at incubating and helping budding businessmen and women form their own startups. Forsberg was hooked.

“The core of a startup is … some kind of activity that may or may not generate revenue, but that leads to a sustainable business model that can support itself,” he explained. “What fascinated me was the prospect of going to Argentina and meeting some of these people who were making these changes and getting to see, first-hand, these products develop.”

Forsberg ran social media accounts for Startup Buenos Aires and was able to watch new ventures being founded. He was consistently amazed by the business ideas. One company was founded that aggregated sources of online media into a Netflix-like package for its customers. Another created software that allowed even computer-illiterate users to create video animations.

When he returned to the U.S., Forsberg dove right into the local business community by working for Startup Milwaukee, a company in the same vein as Startup Buenos Aires. By then, Forsberg had his own startup idea – and it won him third place and $2,000 in the La Macchia New Venture Business Plan Competition at UWM. He and two friends submitted a business plan for their company, named MajorWeb, which sold a software called Mesmer. It acts as a user-friendly interface that works in conjunction with the PAWS system, an online system that helps students track their classes, GPA, schedules and more at UWM.

Then they decided to take it further by entering a contest through the UW-Extension, called the Idea Advance Seed Fund. If they won, they received $25,000 to further develop their business. In order to win, they had to prove their idea could work by finding a suitable market for it.

“We had to conduct countless interviews with potential customers. … It was cold-calls. It was early-morning meetings while administrators got their coffee. It was drives to Madison to meet with the registrar’s office,” Forsberg said. “We were calling schools all over Wisconsin and northern Illinois. Eventually, we did complete the round and earned $25,000 to put toward our business.”

He credits UWM with providing resources and opportunities for budding entrepreneurs.

“I think that one thing that UWM in particular did … was put resources (for student entrepreneurs) in front of them where they can’t miss it: bringing speakers in, bringing programs to the school like the Student Startup Challenge and the New Venture Business Plan Competition,” Forsberg said. “The fact that you have this collaboration … you have students working with students or students working with faculty and even administration working directly with students to make your ideas come true.”

Forsberg and his partners were successful; they netted contracts with the Milwaukee School of Engineering, at UWM, and local colleges. Mesmer was in the process of being implemented in UWM’s Peck School of the Arts and the College of Engineering when bad news came from Madison – Wisconsin Gov. Scott Walker’s state budget for 2015-2017 cut $250 million in funding from the UW-System. UWM had to reprioritize spending, including away from Forsberg’s product.

“That was tough for us and that was certainly a setback – which happens. Ninety percent of startups fail. I wouldn’t necessarily say that we failed. Obviously, we could go to other states,” Forsberg said. “At the same time, me and my two cofounders, we all graduated. … As they say, life happens. That’s why it’s kind of on the side-burner right now, but it’s not something we entirely want to give up.”

Until that happens, Forsberg is happily utilizing his global studies education and his Spanish language skills with his current employer, FunJet Vacations. The travel agency is owned by La Macchia Enterprises – the same La Macchias who sponsored the Business Plan Competition that gave rise to Forsberg’s startup.

“I met the family because they sponsored that competition,” he said. “(At my job) I get to use my Spanish. I get to use my experience in South America to work with people in other countries and work with suppliers in Mexico, in Punta Cana, all over the place. It’s a great company to work for. They really support entrepreneurship in the community.”

He encourages current students, and anyone else really, to get involved if they have a great idea for a product or business. Famous entrepreneurs like Bill Gates and Elon Musk started out as regular people too, Forsberg says. The idea doesn’t even have to be that big – Forsberg’s favorite startup was created by a 14-year-old boy who makes and sells handmade bowties.