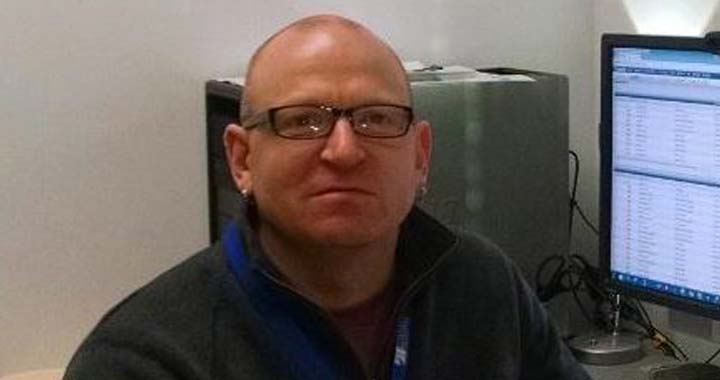 Chances are that the last time you were at General Mitchell International Airport (MKE) in Milwaukee, you weren’t thinking about how much it cost to replace the carpet, or when the sign for Gate 9 was last cleaned. That’s okay – alumnus Timothy Pearson was. He was thinking about those things in such a novel way that he won the equivalent of his industry’s Nobel Prize.

Pearson graduated with his Master’s degree in Geography and a certifi cate in Geographic Information Systems (GIS) from UWM in 2003 after an injury cut his military career short. Even before he graduated, he was working at MKE fi rst as an intern, then as a GIS Specialist, and now as the GIS Coordinator.

GIS allows users to query data, analyze spatial information, edit data in maps, and present all of the results in a map.

“It now allows you to do so many other things with that piece of data,” said Pearson. “You can analyze it, you can sort it, and you can compare and contrast all at the same time. You can represent it spatially, so you can show it on a map.”

Over the course of his 18-year tenure with Mitchell International Airport, Pearson convinced his bosses to adopt GIS-based software to do things like map the airport’s utilities, its terminal infrastructure, and more. His real triumph, though, occurred four years ago when he oversaw the airport’s implementation of Cityworks, a GIS-centric asset-management system that was originally designed for the maintenance departments of local governments and municipalities. The software allows them to keep track of work orders, labor, equipment, and materials.

What people didn’t realize, Pearson added, was that an airport is basically a small city – it has utilities, maintains pavement and equipment, and rents property just like a municipality does. Mitchell was the fi rst airport in the nation to leverage the capabilities of such a system.

“That changed our entire world. That’s when the work that we were doing here became very signifi cant, and that was probably when I started to really have fun at work,” Pearson said. “Now we’re able to map, for example, lights or signs on our airfi eld. We can apply costs to each one of those assets – what does it cost the airport to put them in? What does it cost us to maintain those assets? Using the data that we’ve developed, we can track labor, materials, and equipment used on each one of them.”

That applies to much more than lights and signs; everything, from the airport’s navigational aids to the pavement to the carpet in the terminal, can be tracked and managed in the same way.

Using the Cityworks application revolutionized the way Mitchell does just about everything, including completely eliminating duplicate work orders and a number of reports, saving the airport about $150,000 in paper costs alone. The most signifi cant improvement was the automation of reports to the Federal Aviation Administration. In September 2013, MKE became the first airport in the nation to have their automated reporting functions utilizing Cityworks approved by the FAA. Other airports around the nation took notice, and Pearson said he knows of at least 15 other airports, including hubs like St. Louis, Charlotte, and Atlanta, that have adopted or are considering Mitchell’s methods. His efforts have also been recognized elsewhere.

“We received the Exemplary Users Award award from Cityworks last year and about a month later we received the Special Achievement in GIS award from Esri (GIS software company), and that award is given to one tenth of one percent of their clients,” Pearson said. “For a GIS guy, that’s like winning the Nobel Prize.”

Now, Pearson presents Mitchell’s methods at software and aviation conferences. His most recent trip was to Madrid, Spain, to speak at the Esri European Aviation Summit. It’s nice to be needed, but he’s well aware that his time in the limelight is limited – especially when GIS programs with the caliber of UWM’s exist.

“I’m very proud of the awards and the success and the articles, but I’m much happier knowing that a year from now, there will be a dozen of me out there. There will be a dozen other airports doing what I’m doing,” Pearson said. “The way the (educational) programs are set up today, a student coming out of a university like UWM, which has a very, very reputable GIS program, one of the best in the country, (makes it so that) your experience and your understanding, the experience that you get will far exceed and take you further than the degree that sits at the end of your name.”