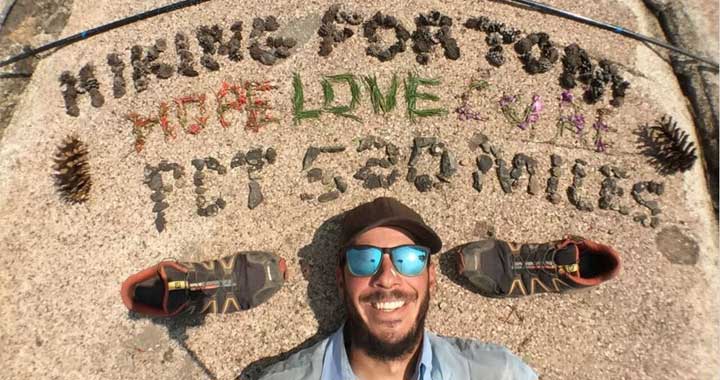 UPDATE May 5, 2016 – It is with great sadness that we must report on the passing of Dr. Thomas S. Hooyer on May 4, 2016. Deepest condolences go out to his family and friends and everyone whose lives he touched through his teaching and mentorship. Read more about Tom’s legacy.

Some students buy gifts or write letters to show their professors their appreciation. James Amato raised $12,000 and hiked 500 miles to show his.

Amato completed his undergraduate degree at UWM in 2015 and is working toward his Geosciences Master’s at UWM as well. He’s the driving force behind the Dr. Thomas S. Hooyer Award, a scholarship bearing the name of one of Amato’s most beloved professors. Tom Hooyer was diagnosed with Amyotrophic Lateral Sclerosis, also known as ALS or Lou Gherig’s disease, during Amato’s undergraduate studies.

“Tom gave me my first shot at research. He was a really good mentor to me. He’s an amazing scientist, a driven athlete, and overall a genuinely nice guy,” Amato said. “He has enjoyed hobbies that have kept him outdoors, including backpacking, skiing, and bike racing. Tom is 52, married to Anne Medeiros and the father of Nieve and Nolan.”

In summer 2013, Amato was invited to assist Hooyer with his drumlin formation research project in Iceland, where Hooyer first mentioned developing a numbness in his fingers. In the spring of 2014, Hooyer was diagnosed with ALS. The invariably fatal neurological disease causes the body’s nerve cells to break down, resulting in progressive muscle weakness until walking, swallowing, and even breathing becomes difficult.

Amato knew he had to do something.

“I was getting ready to do this crazy, long, solo hike on the Pacific Crest Trail (PCT). I read somewhere that using your hike for a cause can be a really great experience. I immediately thought of Tom and what I could do to make good out of this unfortunate situation,” Amato said. “I wanted to use my hike as an opportunity to raise awareness about ALS. I reached out to the Hooyer family with some options, and they really liked the idea of doing a scholarship in Tom’s honor.”

The PCT spans 2,650 miles from Mexico to Canada through California, Oregon, and Washington. Amato completed the Central California section of the trail, 520 miles through the High Sierra, in just 29 days. The first 200 or so miles of the hike ran in conjunction with The John Muir Trail and passed through what many backpackers say is the fi nest mountain scenery in the United States. In addition to contending with 90,000 feet of elevation gain/loss on rough terrain, Amato had to balance his food and water rations with the weight of his pack. He would hike about the equivalent of a marathon each day, carrying 40 to 60 pounds.

The experience was incredible, he said.

“Every day I was confronted with a new challenge, and each time I managed a way to overcome it: severe blistering, dried up water sources, bad weather – the list goes on. There were several occasions I just wanted to give up, but those were the times I found inspiration to move forward through Tom and his situation,” Amato said.

“Among the hardships there were plenty of pay offs. You would just see the most amazing things on the trail, just spectacular views every day,” he added. “Some of my highlights were summiting Mt. Whitney, the tallest peak in the lower 48 states, as well as ascending Forester Pass, the tallest point on the PCT. I met some amazing people on the trail, some people that really touched my heart.”

Amato set an original goal to raise $3,000, but donors soon outstripped his expectations and raised $12,000 during the initial fundraiser.

“We got support from everybody: family and friends, students, faculty, and coworkers, just a variety of people,” he said.

Since then, more have donated to the scholarship fund, which will support domestic and international field research for undergraduate and graduate Geosciences students. Today, a donation page is available at https://uwm.edu/geosciences/give/ and the first awards will be handed out this spring.

Hooyer has a hard road ahead of him, but his legacy will support Geosciences students for years to come. It’s Amato’s way of not only honoring a beloved professor but also sharing his love of his studies and giving back to the Geosciences Department.

“I hope this scholarship gives other students an opportunity like I had,” Amato said.

Studying the roots of the Seed Vault