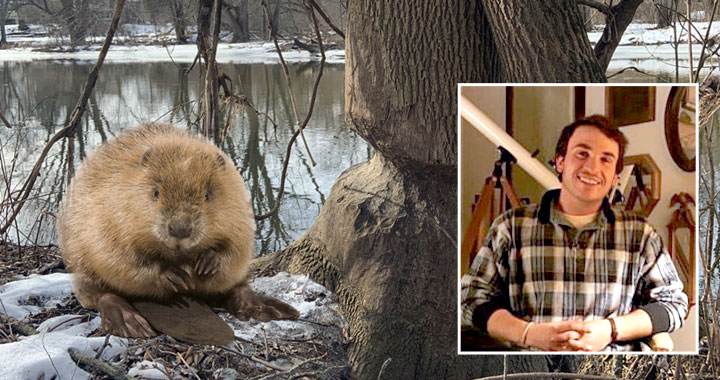 Well, hot dam – Max Rock is helping to bring beavers back to the Milwaukee River watershed.

Beavers were once ubiquitous in southeastern Wisconsin. The fur trapping craze of the 1600s decimated the population, however, and beaver were brought to the brink of extinction. Locally, the animals’ population never recovered their old habitats once the city of Milwaukee was built.

That’s a shame, said Rock, because beaver play an important part in ecosystems across the country: They build wetlands.

“The beaver’s whole ideology in life is to dam running water,” Rock joked. “The water that the beaver is damming is creating a wetland, and a wetland is the rain forest of the north. It has potential to increase biodiversity and genetic exchange. Wetlands are also economic boosters. Our government loves wetlands and they protect wetlands; however, they often fail to protect the beaver.”

And, in Milwaukee, wetlands represent a new way to protect Lake Michigan.

“We want to re-establish beaver on the river watershed in order to mitigate flooding during high water rain events,” Rock explained. “Beavers create a lock system-like structure on the watershed and can retain certain amounts of water. It’s in its infancy still, but as of right now, we are looking for suitable habitats for those beaver to live in order to do that work.”

This beaver reestablishment project is funded by the Milwaukee Metropolitan Sewer District and relies on the work of the Milwaukee Riverkeeper , an advocacy organization run by Rock’s boss, Bob Boucher, that hopes to protect Milwaukee waterways; UWM geography professor Changshan Wu, who works with geospatial models to identify possible beaver habitats; and UWM associate professor of civil and environmental engineering Qian Liao, who studies stream gradients to determine how beaver might impact hydrology of the watershed.

Rock is a geography student at UWM who serves as the group’s eyes on the ground. Before the state’s lockdown, Rock and his partner, UWM student Madeline Flanner spent each Friday hiking stream banks looking for signs of beaver.

“My role was to implement an aspect of geographical information systems to make field work accessible online and to find suitable habitat along the river watershed,” Rock said. “I used a program called Arc GIS Collector. It’s a lot like as if you’re using Google Maps on your phone. As we’d go to these different site locations, we could drop ‘pins’ in locations where we found beaver activity.”

GIS is a technology that provides the ability to capture and analyze spatial and geographic data. Rock can attach data points to certain locations on a map to give information about that locale.

“For instance, Lincoln Park had a beaver lodge, a beaver dam, and a bunch of beaver markings on the trees,” he explained. “Using GIS allows you to create maps to display data that you have gone out and observed in the field.”

Beaver like habitats with lots of trees — preferably willow, aspen, or poplar — where they can dam a stream to create a pond. They construct a lodge in the middle of the pond, just like a castle with a moat, Rock said.

Ultimately, “I would like to see beaver, not only on the watershed to mitigate flooding during high water events, but also for the public to notice a cleaner river and an increase in biodiversity due to the presence of beaver,” Rock said. “I think that all goes together to help achieve a cleaner great lake and a step closer to suppressing the effects of climate change at a macroscale.”

Rock was slated to present his research at the UWM Undergraduate Research Symposium, but the forum was cancelled due to the coronavirus pandemic. Instead, he and more than 270 other students submitted their presentations for a virtual showcase.

“It was important to us to not ‘cancel’ the Symposium, but to offer it in another format. As an annual event, it represents a culmination of hard work from the past year,” said Kyla Esguerra, the associate director of UWM’s Office of Undergraduate Research.

“This way (the students) still have the opportunity to reflect, synthesize what they have learned, and add this virtual presentation to their resumes.”

“Students are having to make a quick pivot and think seriously about how to represent their work in an unexpected format, but they are rising to the challenge,” added Nigel Rothfels, the Office’s director.

“In doing so, they are also preparing themselves for what may become increasingly prominent expectations at all kinds of academic conferences in the future.”

While Rock was disappointed that he was unable to present his work in person, he hopes that people will recognize that re-establishing beaver in the Milwaukee River watershed could be a viable method for improving the health of Lake Michigan.

“We have the fourth-largest freshwater source in the western hemisphere, and I think we need to protect that. Doing this kind of research shines light on different ways to do that,” he said.