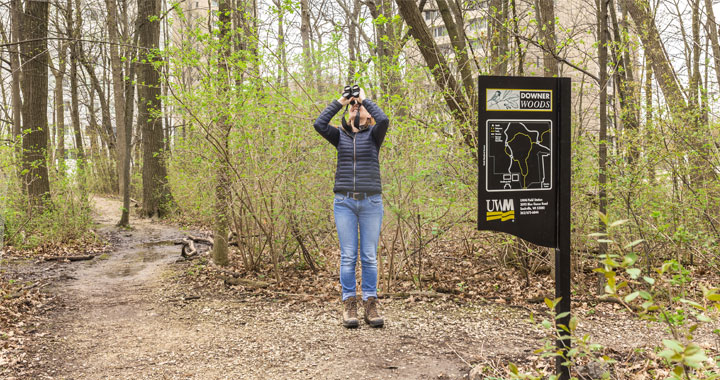 High above the earth, a small satellite is orbiting the planet and taking pictures of the Amazon Rainforest, the Andes Mountains, and UWM’s Downer Woods.

UWM is part of an international collaboration working with data collected by VENµS (Vegetation and Environment monitoring on a New MicroSatellite). Administered by the Israeli and French space agencies, the satellite is designed to both test new technologies and collect data on a range of scientific interests.

“What we are particularly interested in is the multi-spectral optical sensor that allows us to determine phenology metrics from vegetation indices,” said UWM Geography professor Alison Donnelly. “This helps us track the greeness of the vegetation and estimate the start and end of the growing season.”

That’s where Downer Woods comes in to play. The wooded area on the northern edge of campus provides the perfect test bed to assess the accuracy of the satellite sensors in detecting green vegetation below.

“We need to be in Downer Woods every second day during spring and autumn making direct visual observations of shrubs and trees in order to determine when the buds begin to open and leaves emerge as the woodland transitions from brown to green,” Donnelly said. “We will compare these observations to the satellite data.

“That’s why we were selected,” she added. “Our proposal to the VENµS team was to help validate their phenology product.”

Donnelly applied to take part in the project at the prompting of a former graduate student, Rong Yu. Together, the two submitted a proposal to the VENµS team in 2015.

“We didn’t hear anything for nearly three years,” Donnelly said. “It was just that it takes a long time to get a satellite into space. They let us know in May 2017 that our proposal was successful. Out of hundreds of proposals, ours was identified a useful for validating their phenology product.”

The next step was to procure funding so that Donnelly could perform the research the team required. She needs manpower to collect data and analyze, test, and validate it, so she applied for a UWM Research Growth Initiative grant and received it in April. With that money, Donnelly will be able to hire Yu.

Together with a graduate student Chloe Rehberg, they will process their findings and present them at both national and international conferences.

To ensure that the satellite is getting an accurate picture of the vegetation on the ground, Donnelly traverses Downer Woods on foot, noting when shrubs and trees put out buds and leaves. She’ll take the average of the data from the ground observations to calculate one ‘greening” number – a percentage of foliage that she can compare to the satellite’s averages.

But Donnelly’s work doesn’t stop with tracking when leaves appear. For instance, she’s observing native and invasive species of shrubs to compare how they differ in leafing out. She also wants to expand the project in the coming years, working in  conjunction with UW-Madison’s flux tower in Park Falls, Wisconsin, which measures changing carbon dioxide levels in the surrounding atmosphere.

“We would then look at carbon flux in relation to the satellite data. Then we would have observations from the plants, we would have flux data, and we would also have satellite data,” Donnelly said. “The idea is that once the leaves start to photosynthesize, they’re taking carbon out of the atmosphere. As trees grow from zero leaf to full leaf, the rate of carbon dioxide they’re absorbing increases, and decreases as the leaves start to color and fall off in autumn.”

The VENµS project and UWM’s involvement have the potential to help scientists get a better understanding of the various ecosystems around the world, which is why it’s so important that the satellite’s sensors are precise.

“If we can validate the model on a small area, then we know that the satellite data over larger areas is pretty accurate,” Donnelly explained. “It’s important for us to understand how ecosystems work today. If we know what’s happening today, then we can make reasonable projections of what will happen in the future.”

Using the sensor will also help build on phenology-tracking research performed by UWM Distinguished Professor of Geography Mark Schwartz. His tools used to predict the start of spring across the country are instrumental in assessing how climate change is already affecting our environment.

“The satellite data will help us determine whether ecosystems are vulnerable or resilient to changes, whether it’s climate-driven change or other changes,” Donnelly said.

A friendship turns to internship and job at Usman La’Aro

PhD grad gets Fulbright to study the foibe