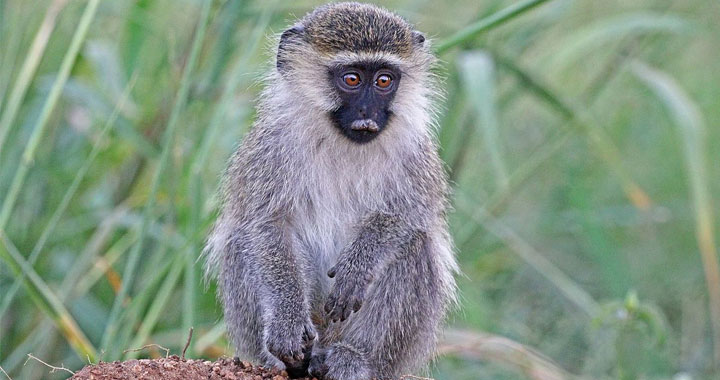 Vervet monkeys have a genes that could be possible defense mechanisms against SIV. Photo by Charles J. Sharp.

Vervet monkeys found in Africa and the Caribbean are the most abundant natural hosts of the simian immunodeficiency virus (SIV), a close relative of HIV/AIDS.

Unlike humans with HIV however, vervets infected with SIV rarely get sick with simian AIDS.

In a new study, a research group that includes UWM anthropologist Trudy Turner found that the animals’ curious tolerance comes from evolution that has favored certain genes in their DNA.

This discovery of a possible defense mechanism against the virus, described in a paper published Oct. 30 in Nature Genetics, could offer clues for developing new treatments for HIV/AIDS and could inform the future evolution of genes involved in HIV.

Vervet monkeys, also called African green monkeys, have long been used as biomedical models for a variety of human diseases. While it’s a long way from monkeys to humans, Turner said, this work has comparative value. For example, it could help scientists determine whether HIV and SIV share a common ancestry, as
some research has suggested.

Among the researchers’ findings is that selection occurred in the animals’ genes that regulate viruses, rather than fight them. And genes that govern progression of immunodeficiency were highly selected.

The team’s sampling strategy was designed to investigate the selection of genes across a diverse group of the monkeys from subSaharan Africa to the Caribbean.

“The diversity of the sample was important so that we could determine how widespread the evolutionary selection is from a large geographical area,” said Turner, professor of biological anthropology.

The animals’ tolerance for SIV was the main reason an international consortium of scientists who study the monkeys formed in 2009. The consortium had the whole genome sequenced in 2015, opening up new lines of inquiry.

“We trapped and released 2,000 animals and looked at all sorts of biological questions from that,” said Turner, who directed the African fieldwork operations. “But the hot part of it was the relationship that showed up between some of the genes and SIV.”

The group’s discovery of genomic adaptation to viruses agrees with recent evidence that viruses played a major role in the evolution of proteins, which carry out all the functions of life, in mammals.