L&S / All News / From UWM to UFC, alumna set for ultimate fighting debut

From UWM to UFC, alumna set for ultimate fighting debut 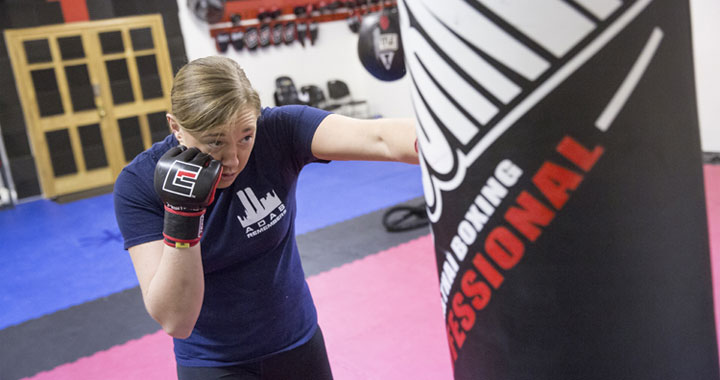 Leah Letson discovered an unexpected passion for mixed martial arts while at UWM. Now, the 2016 grad is preparing for her UFC debut. (UWM Photo/Troye Fox)

Professional mixed martial arts athlete Leah Letson unlocked a passion for the sport during her time as a UWM student. Now graduated, she recently signed a professional contract and will soon make her debut with Ultimate Fighting Championship, the highest level of the sport.

For Letson, what had started as a way to stay in shape for basic training with the Wisconsin Air National Guard turned into a hunger to succeed at the highest level of one of the world’s most violent sports.

From the ages of 5 to 17, Letson practiced taekwondo – ultimately achieving the rank of third-degree black belt. When she moved to Milwaukee to attend UWM, she wanted a new martial art to conquer. That’s when she discovered cardio kickboxing through UWM’s Sport and Recreation offerings. The course’s instructors Jake Klipp and Zak Ottow, who have years of experience as trainers and fighters, saw professional potential in Letson.

“I would always hear someone (in the class) just ripping these kicks off, cracking the pads,” Klipp said of Letson, “I would kind of crank it up a little bit in Leah’s classes just to see how she’d handle it, and she was a machine. That’s what caught our eye.”

“They saw that I was a hard worker and that I had some talent,” Letson said, “so they invited me to try (Brazilian) jiujitsu.”

Letson, who graduated in 2016 with degrees in criminal justice and psychology, served in the Air National Guard throughout her time at UWM.

She began training for her MMA debut midway through her degree, after returning from basic training with the Air National Guard. A month and a half in, she competed in and won her first amateur bout on Nov. 9, 2013. A year later, she had her first professional bout – a loss, her first after going undefeated in eight bouts as an amateur.

From there, her journey to the octagon hit a few speed bumps. She underwent ACL surgery that postponed her training. In November 2015, she got her first professional victory in her first fight since losing a year earlier.

She later fulfilled her other passion – serving her country – overseas as an electronic protection technician from May through November 2017. The decision to serve came with an unforeseen lost opportunity.

“While I was over there, my coach told me that I had gotten a couple of UFC calls,” said Letson. “It kind of bummed me out that I couldn’t take it.”

Knowing she was on the UFC watchlist, Letson resumed training immediately upon her return from duty. Before getting a chance to fight another bout, she got an unexpected call. The UFC offered her a contract, and she signed in January 2018, just three months after her return.

Never one to shy away from a challenge, Letson already has her sights set on becoming a world champion. However, that’s only part of what she hopes to achieve.

“I really like being a role model – especially for kids and young girls. I like to show them that they can do whatever they want to do no matter what society’s stereotypes say,” Letson said. “That’s what I want to do with my fame as a fighter.”

Klipp thinks she has the ingredients for success.

“Leah is very hardworking and coachable,” he said. “She has a ton of natural talent, but we see plenty of fighters with talent come in the gym. What’s rare is a talent like Leah who works relentlessly to become the best. She has that ‘never give up’ attitude that so many successful people have.”