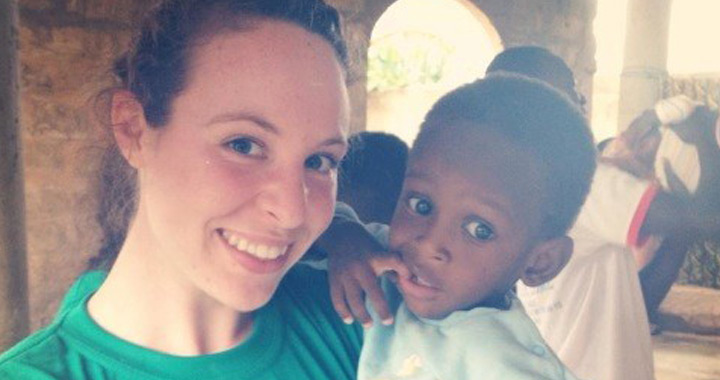 Language has opened doors that Mary Sherman only dreamed about.

Sherman, a French and Global Studies double major who graduated from UWM in May, begins a teaching stint in France in October. She was hired by the French government to instruct primary and elementary school students in English through a program called TAPIF – Teaching Assistant Program in France. Her posting will be near Chartres; her placement will be for one year.

But it’s what she wants to do after that that makes her remarkable.

“Eventually, I would love to work within human rights and specifically to combat child trafficking and sexual exploitation,” she said. “When I (studied abroad in) Italy, I saw a lot of it there. Walking around, you can see shady deals going on on the street. It’s not obvious, but you can still see it.”

At home in the United States, Sherman volunteered for local organizations that address human trafficking, like Exploit No More, which aims to aid children sold for sexual exploitation.

Sherman credits several classes at UWM with piquing her interest in human rights. One class, called Perspectives in Humanitarianism, discussed the challenges facing aid workers around the world while another, called Rethinking Global Security, allowed Sherman the opportunity to write a capstone paper about how human trafficking impacts human security around the world.

She continued learning about the challenges facing at-risk populations while on an internship working with women’s and children’s rights in Lomé, the capital city of Togo in western Africa. Once again, Sherman’s major in French proved essential.

“I love that (French is) global,” Sherman said. “I eventually want to work in human rights and probably more specifically in West Africa, where they speak French.”

Over the next year, Sherman will gain more experience with her chosen second language while learning more about French culture and customs. After her year of teaching is over, though, Sherman knows she wants to stay overseas. She is considering graduate school in England or Denmark to further her education in global security.

To help people and find a satisfying career, Sherman said, get involved.

“Get started early. Look at volunteering experience early and job opportunities. If you find the track or career field you want to get into, get into it right away,” she advised. “You never know what experiences will open doors for you, so be open to whatever comes your away.”