Film and journalism bring grad to forefront of Milwaukee Film 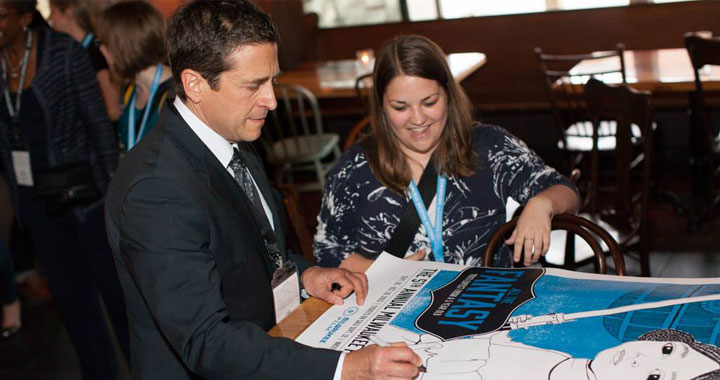 Megan Benedict has eclectic tastes in movies. Her favorites are A Single Man, directed by Tom Ford, and the old Gene Kelly musical Singin’ in the Rain. Naturally, she’s a Film Studies graduate.

Benedict also majored in Journalism, Advertising, and Media Studies. Today, her job is a perfect marriage of the two: Benedict is the Communications & Press Manager of Milwaukee Film.

It’s the culmination of years of work; Benedict began working for the organization as an intern while she was attending UWM. She chose the school after visiting the Union Cinema and falling in love with the programming. Winning the New Directions Scholarship from the College of Letters & Science sealed the deal.

Her time at UWM proved to be a wonderful experience, especially when it came to internships.

“I had a professor named Susan Kerns, who at the time was in charge of the Education Department for Milwaukee Film. She handed us all program books for the Milwaukee Film Festival,” Benedict recalled. “I went and I made my parents drive down two hours to come with me, and I took friends with me to go see movies. I just really fell in love with the festival. The next year, I was a volunteer in the office and in the theater venues, and in the following year I became an intern.” 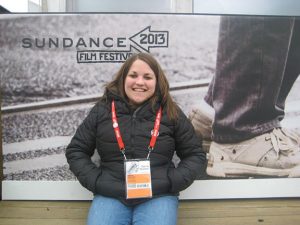 Megan Benedict takes a moment to enjoy her surroundings as an intern at the Sundance Film Festival in 2013. Above, Benedict talks to screenwriter and film and television producer Paul Attanasio. Photos courtesy of Megan Benedict.

During her first internship, Benedict worked on the program book. The next year, she returned to Milwaukee Film as a programming intern, and then became a seasonal marketing assistant after graduating in 2013. She served her time at Sundance and Cannes, working as an intern at each of those prestigious film festivals. Then, in 2014, while working a season position at Sundance, she was recruited back to Milwaukee Film as Artistic & Executive Director Jonathan Jackson’s executive assistant.

She took one promotion and then another, until she eventually landed her current role. It is an intense labor of love. Benedict is in charge of managing Milwaukee Film’s media sponsorships, coordinating press timelines and writing press releases, serving as the project manager of the program book released with each annual festival, and much more.

The highlight of the year is the Milwaukee Film Festival, held each fall. Many of the films revolve around central themes – films created by local directors, for example, or films created by African American directors. Benedict’s favorite theme is the Worldviews program, a selection of foreign narrative films. That’s the one she plans each year.

“Because of our placement in the year and our market size, sometimes we struggle with getting the films that we want to bring to Milwaukee,” she said. “It is extremely gratifying when you bother a distributor for six months to show at the festival and they finally say yes. You get to show it to a Milwaukee audience, and they go nuts for it.”

One success was a film called The Tribe. Benedict saw a still photo from the film in the lineup at Cannes and knew she wanted to bring it to Milwaukee for the 2014 festival. The film’s dialogue is delivered completely in Ukrainian Sign Language, presented without subtitles. The audience has to rely entirely on body language to understand the plot. And what a plot – “It’s like a mafia movie with Ukrainian student who happen to be deaf,” Benedict said. “The first time we showed it, a woman passed out. It’s a little intense. … The jury really liked it as well. I felt really good about that.”

Benedict just marked the end of another successful festival that saw nearly 77,000 attendees, an 8 percent increase over last year. Planning for a growing event presents a unique set of challenges, but they’re challenges she enjoys. She directs a lot of credit to UWM for setting her on the path to her job.

“The professors that I had were wonderful resources for me. They have helped me get jobs, internships,” Benedict said. “They’ve introduced me to people who have helped me in my career. When people ask me what I’ve taken away from UWM, it’s that my professors led me directly to a career because I talked to them. They knew my strengths and weaknesses and knew what I would be good for before I did.”