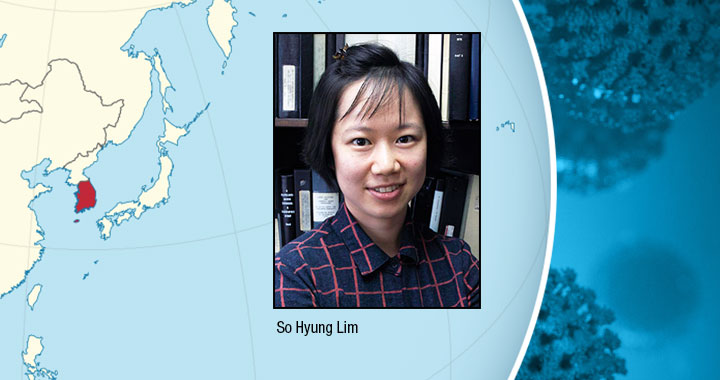 This year isn’t the first time South Korea has weathered a coronavirus epidemic.

In 2015, unlike many other countries except for a few in the Middle East, South Korea saw a virulent outbreak of Middle East Respiratory Syndrome (MERS), a strain of coronavirus in the same family as SARS-coV-2, the virus causing today’s COVID-19 pandemic.

Unlike many countries, however, South Korea’s management – or lack thereof – of MERS turned the country into the second-largest site of infection worldwide.

As a South Korean native, that made UWM graduate student So Hyung Lim wonder: What made the country so susceptible to the disease?

The answer, she found, was not in biology; it was in politics.

A history of corruption

Lim is working toward her PhD in geography at UWM. Her recent paper , published in the journal Territory, Politics, and Governance with her advisor, associate professor of geography Kristin Sziarto, explores the South Korean response to MERS and how the nation’s policies led to a more severe outbreak than its neighbors.

The severity of MERS came as a surprise, she said, because just 13 years before, South Korea had skated through an outbreak of Severe Acute Respiratory Syndrome, or SARS.

“It was a bit of a complimentary moment for South Korea, but I also saw that there were not any changes or planning for future outbreaks,” Lim noted. “Actually, circumstances worsened in terms of privatization and deregulation. Between 2002 and 2015, public health became worse, and worse, and worse.”

That, she added, was a holdover of the country’s past under dictator Park Chung-hee, who assumed leadership in 1961 after a military coup and ruled as president until his assassination in 1979. While the country is technically a liberal democracy today, Lim describes its government as a “hybrid” – “between autocracy and democracy, between liberalism and authoritarianism,” she said.

“In the dictatorship period, there was a coalition made between the state and the businesses, known as chaebols. (They) are strongly connected to each other via kickbacks and favors. That still impacts South Korea, of course in public health and this response,” Lim added.

When early cases of MERS began to proliferate, the South Korean government’s response was to obfuscate. For three weeks after the first outbreak was detected, officials withheld information from the public, including the number of people infected and affected cities, according to Lim. The delay allowed the infection to spread rapidly.

Lim gathered her data from government documents and through interviews with South Korean health professionals and activists. She blames the corrupt relationship that the government built with private businesses for the botched response.

“The government wanted to protect big, especially private, hospitals. The government and hospitals were worried about the other patients – or their profits. They made agreements to (withhold) some of the information and that worsened the situation,” Lim said.

Even after the government admitted fault, one private hospital still did not coordinate with officials to handle infections. Instead, it oversaw its own response, sometimes to the detriment of citizens. Samsung Hospital in Seoul is blamed as the site of half of the country’s MERS exposures.

Learning from mistakes and making new ones

Five years later, the South Korean government seems to have learned some lessons from MERS. She is currently researching the government’s COVID-19 response with UWM geography program associate and PhD student Niko Papakis. The two have a peer-reviewed manuscript submitted to the journal World Development and they will submit another to Political Geography.

“This time, from the very beginning, … everything was so quick, so transparent, and looked so democratic. All of the information was open to the public early,” Lim said. The South Korean government also implemented extensive medical testing and other forms of technology to track the spread of the virus.

But, Lim worries, those efforts are a veneer over some authoritarian policies.

“They are showing all of the information, including the locations and hospitals and streets that (infected people) passed. But that makes a lot of ‘Othering,’ and so people are really traumatized and victimized by the information without any protection from the disclosure,” Lim said, noting that the government has not afforded its citizens privacy.

She also observes that officials have relied heavily on police and the military to enforce quarantines, as well as crack down on suspicious symptoms and behaviors of all sorts – but that more violent enforcement has been targeted towards vulnerable populations, especially those critical of the government.
Cross-country parallels

South Korea is halfway around the world, but Lim has noticed similarities between the South Korean government’s response to COVID-19 and the United States’, and not necessarily in a good way.

“Both countries are capitalist, or liberal countries, and what they are doing to the public is pretty much the same. The state is violent and abusive sometimes, or hiding some things sometimes, or refusing accountability or responsibility sometimes,” she said. “In terms of those abstract things, such as abandonment, refusal, violence, and authoritarianism, I can say yes, they’re the same.”

So how should these governments handle COVID-19? Lim says she’ll leave that question to further discussion, but there is one thing she is sure of: “So-called liberal governments should not hide behind the rhetoric of democracy, liberalism, transparency, or openness when they are not.