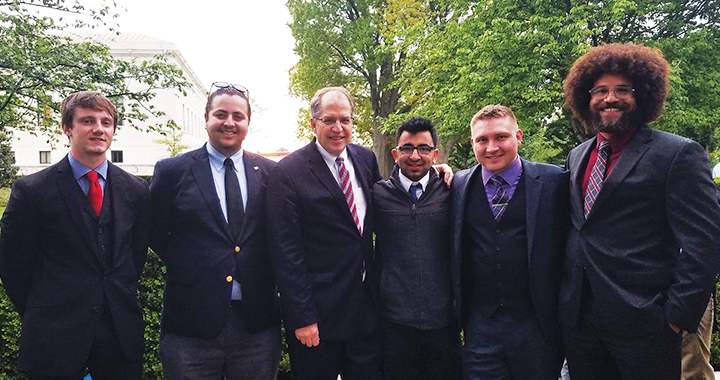 In April, they went to see how the pros do it.

Omar Abu Ali, Kyle Beesley, Joshua Boschke, Aymen Issa, and Daniel Kafka are as different in their political ideologies as they come, but the students all share a deep interest in American politics. Abu Ali, Beesley, Boschke, and Issa bonded in Benesh’s capstone class, where they were expected to research and argue actual cases that had potential to be heard by the United States Supreme Court. Acting as attorneys and SCOTUS justices, the four tackled Trinity Lutheran v. Comer, writing cert petitions (documents that petition the Supreme Court to hear a case) and other court documents in addition to preparing oral arguments and researching how the actual judges might decide the case.

“The experience in Professor Benesh’s class is how judges and attorneys feel at the federal level,” said Issa. “The semester after that … we saw that Trinity vs. Comer got a date for the oral arguments. Josh and I flirted with the idea – wouldn’t it be cool to go to the oral arguments? We talked about how Benesh’s class really pushed us to pay attention to the Supreme Court.”

Kafka, who was taking another class with Professor Benesh at the time, signed on for the trip as well and Benesh gave the students her whole-hearted support and approval. They were on their way to Washington, D.C.

The city’s history was awe-inspiring, from the monuments to the country’s founding documents stored in the National Archives. Less inspiring was the hostel where the group stayed the night – the room was cramped, miserable, and smelly. It turned out to be a blessing in disguise; unable to sleep in the poor accommodations, Issa left the room and went to join the line to get tickets to the hearing. 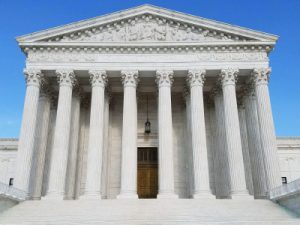 The Supreme Court allows only about 50 people or so to watching hearings, and tickets are first-come, first-serve. The line to secure tickets for the Trinity Lutheran case had already formed by the time Issa arrived at midnight, with several people camped out in sleeping bags to hold their place. He called in the rest of the group, and they waited, dressed in suits and unable to sit down, through the night. They were in time; each student was able to get a ticket to hear the oral arguments.

Hearing the oral arguments was fascinating, they all agreed. Each Supreme Court justice has their own brand of politics and personality, and it shone through in the questions they asked each attorney. Chief Justice Roberts ran the proceedings calmly, while Justice Stephen Breyer asked pointed questions and was an overall “sassy pants” according to Kafka and Abu Ali.

But the most interesting moment was when newly-minted Justice Neil Gorsuch, an appointee by the Trump administration whose confirmation by the U.S. Senate was extremely controversial, asked his question. The Trinity case marked Gorsuch’s first major hearing as part of the Supreme Court.

“When he finally asked a question when Missouri argued, the entire crowd leaned his way to hear him. It was a historic moment,” Issa said. “We all watched the news. We know what happened with his confirmation. To hear him ask a question on this case while we were sitting in this courtroom was huge.”

Watching the justices work was an exercise in understanding psychology and law, Abu Ali noted.

“With a lot of questions the Supreme Court was asking, they were giving the lawyer from Missouri the answers in the questions. They wanted to help him build an argument, but he missed it every time, and the justices got more and more frustrated as a result,” he said.

The students walked out of the courtroom exhausted from their wait in line, but with a deep appreciation for the judicial branch of the United States government. The trip actually inspired Abu Ali to consider applying for law school after graduation, though he had no interest in it before.

And, Issa said, the trip made him even more of a Supreme Court junkie.

And, Beesley added, the trip gave the group a deeper friendship and appreciation for different political stances. Beesley is a staunch conservative; Issa is a libertarian; Boschke leans independent while Abu Ali calls himself a liberal and Kafka proudly declares his socialist stance.

“It’s funny that we can all get together, joke at each other’s expense and rag on each other, but at the end of the day, we’re all talking about these intellectual subjects and we’re all learning from each other,” Beesley said. “There are times that my view has changed from something that Aymen or Dan said. If you’re in an echo-chamber, you’re never going to get that. You’re never going to learn from other people’s perspectives.”