Geosciences study on fluid movement off to a great “rocky” start 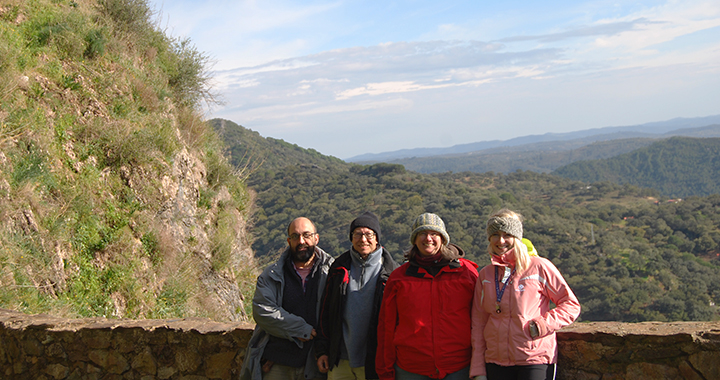 In southern Spain, in a region more famous for its delicious iberico ham than its rocks, sits a tectonic boundary nearly 400 million years old. It was formed when two tectonic plates collided, breaking rocks at the earth’s surface and squishing them together beneath it.

UWM Geosciences professor Dyanna Czeck thinks this boundary might be the key to understanding how fluids move through rock during this type of collision.

“What we’re looking at in particular is how the rocks deformed and particularly how any kind of fluid moved along that zone and caused them to form differently,” Czeck said. “We’re looking at the chemistry of the samples that will give us some clues about what the fluid was like at the time that they were part of this boundary.”

Fluid movement through deforming rock is a relatively unexplored field. While Czeck and her assistants, graduate student Sheryl Stephenson and undergraduates Dulce Hernandez-Blanchard and Nancy Duque, are looking at ancient rocks, their study could have some modern-day implications.

“When we’re trying to understand where rocks are strong and where rocks are weak, a big component of that is fluid. We as scientists actually know very little about fluid dynamics through sheer zones,” Czeck said. “Fluids can make the rocks squishier, weaker, but they can also increase the local stress in the rock and cause fractures to occur, leading to earthquakes. Understanding why earthquakes happen, where they happen in the crust, and how fluids affect the strength of the rocks is a really big deal.”

To study the movement of fluid, Czeck and Stephenson journeyed to southern Spain in January to gather rock samples along the tectonic boundary. Traveling primarily along roadways where construction crews had blasted through the rock surface, they hiked up to five miles a day, carting all kinds of samples back and forth.

Today in Czeck’s lab, the group has formed a kind of model fault line: The rock samples are spread over two tables. The gap between the table tops represents the fault and the rocks, lined up in neat rows, correspond to the location they were gathered from – some close to the tectonic boundary, others from farther away.

The samples range from hard, chunky stones to rocks that practically crumble to powder when touched, and everything in between.

Unfortunately, the Geosciences Department’s rock-crusher was only recently repaired, so Duque and Hernandez-Blanchard ground many of the rock samples down to powder by hand. The powder is turned into small discs that can be examined using x-ray fluorescence to determine which elements are present in the rock.

By examining those elements in rocks closer to and farther away from the tectonic boundary, Czeck will gain a better understanding of how hot water moved through the rock at the time of the collision. Fluid changes the rock as it passes through, leeching out some elements from some rocks and depositing elements in others.

“We’re essentially seeing at the surface what occurred and formed at depth – all of the textures that formed way down below,” Stephenson said.

And with that, Czeck and her students may gain a better understanding of how the earth itself is formed and constantly changes.

“Pumping fluids through deformation zones can drive the rocks toward, on one hand, getting earthquakes, and on the other hand, squishing more and not getting earthquakes, and nobody understands exactly why sometimes it goes one way and sometimes it goes the other,” Czeck said. “The first step of understanding that is to trying to document, from some of these ancient zones where we have these deeper rocks exposed, where the fluid was.”